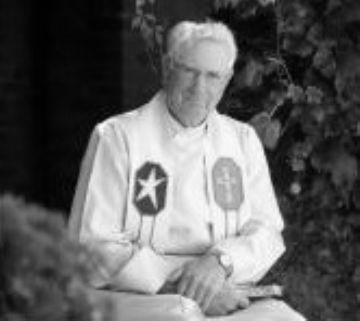 I.C. "Cliff" Gronneberg of Bozeman, MT, November 9, 1917 – April 26, 2021. Cliff was born on a farm near Hannaford, North Dakota. He graduated with his BA in 1941 from Concordia College, Moorhead, MN, and his MN DIPL in 1945 from Luther Seminary in St. Paul, MN. Cliff was ordained as a Lutheran Minister in 1946. He served as a Navy Chaplain during WW2, where one of his assignments was to the Boston Naval Yard. He served as one of three chaplains and had the honor of being the chaplain on the USS Constitution, aka Old Ironsides, that fought in the War of 1812. Later he was promoted to base chaplain. From there he was sent to San Francisco and Hawaii. He was discharged in 1946. Cliff married Ruth Horton in 1946 and they had six children; Ingrid, Jim, Mark, Mary, Paul and Krista. Cliff served churches in Montana, North Dakota, Wyoming, and Minnesota. He retired at the age of 65 and then went on to serve as an interim minister for an additional 17 congregations throughout the Montana Synod, his last at age 93. He was honored with the 2009 Spirit of Hope Award. Cliff was selected to be a member of an Honor Flight to Washington, DC, which was a great source of pride for him. He also took great pride in being 100% Norwegian and was a past-president of the Bozeman chapter of Sons of Norway. He served the State of Montana legislature by serving as both Chaplain of the House and the Senate. Cliff was preceded in death by his wife, Ruth; son, Jim and daughter, Mary (Don) Chapman. Cliff is survived by his brother, Elmer of North Dakota; his daughters, Ingrid (John) Johnson of Idaho, and Krista (Dennis) Hammann, of Minnesota; sons, Mark (Julie) of Texas, and Paul of Minnesota; 15 grandchildren and 9 great-grandchildren. Visitation will be held on Friday, May 7, 2021 from 6:00 – 8:00 p.m. at Dokken-Nelson Funeral Service, 113 S. Willson Ave, Bozeman, MT. Funeral Service will be held on Saturday, May 8, 2021 at 10:00 a.m. at Hope Lutheran Church, 2152 Graf St, Bozeman, MT. Interment will be held at Sunset Hills Cemetery after the funeral service. Memorials in Cliff's name may be given to a Lutheran church or charity of your choice. Cards of condolence may be sent to Mark Gronneberg, 12320 Grosbeak Dr., Denton, TX, 76207. www.dokkennelson.com

To plant trees in memory, please visit our Sympathy Store.
Published by The Montana Standard on May 7, 2021.
MEMORIAL EVENTS
May
7
Visitation
6:00p.m. - 8:00p.m.
Dokken-Nelson Funeral Service
113 South Willson Avenue, Bozeman, MT 59715
May
8
Funeral service
10:00a.m.
Hope Lutheran Church
2152 Graf St, Bozeman, Montana
Funeral services provided by:
Dokken-Nelson Funeral Service
MAKE A DONATION
Please consider a donation as requested by the family.
MEMORIES & CONDOLENCES
Sponsored by Dokken-Nelson Funeral Service.
1 Entry
I remember your family and going to Broadwater school in Helena, MT with some of you. I was always in awe at the big yellow house you lived in on the corner near the school. A good family....good memories. God speed to you father till you are reunited.
Judy Palmquist
May 9, 2021