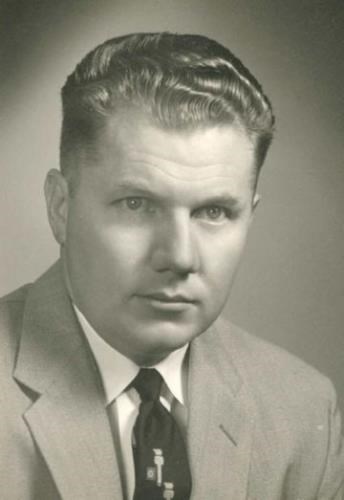 It is with great sadness that we must say goodbye to the man we love so much. But through our tears, our faith brings joy knowing he has made his way home to our Heavenly Father and will be reunited with his family who have gone before him.

Our dad, Jack was born on April 14, 1925 in Billings, Montana to Irene (O'Donnell) Oberweiser and Emery Oberweiser. He was an only child but grew up in a household of aunts and uncles, and many cousins whom he felt were like brothers and sisters. He excelled in sports and was lovingly nicknamed "Pinkie" because of his beautiful red hair.

After high school Jack served our country becoming a navigator in the US Army Air Corps during WWII, flying in the China, India, and Burma Theater.

His time in the service was followed by a couple of years at Portland University playing football for the Pilots and his last two years in Missoula at the University of Montana playing for the "Grizzlies". Along with playing end on the Grizzly football team he picked up his degree in business administration at the U of M.

Jack went on to teach and coach basketball for two years in Rapelje, a class C school and he also worked several years in the business world before the gridiron virus struck.

Jack was hired as head football coach at Anaconda Central in 1955 and held that position until the school closed in 1973. He was also head track coach from 1957 to 1973, served as assistant basketball coach and taught bookkeeping, Math and PE. The Central "Saints" became a second family and the friendships that started there would last a lifetime!

After the painful closure of our Catholic schools, Jack was hired as a teacher and assistant football coach for the Anaconda Copperheads, later becoming the head football and track coach. He retired in 1988 after teaching and coaching for a total of 35 years, 33 of those years in Anaconda. Jack's days of retirement were filled with following his grandchildren from sport to sport enjoying each of them to the fullest. Jack's Catholic faith was the foundation of his life and he never took it for granted. What a beautiful example he has been for his family and all those who came to know him.

In 1948 just before attending the U of M Jack married the love of his life Carol Townsend and together, they brought seven children into this world and were foster parents to two brothers, Oscar and Reinaldo Fong who quickly became members of our family.

Jack and Carol were married on July 5th, 1948 at St. Patrick's Church in Billings, Mt. Their union of 72 years has been a true testament to their faith and marriage vows. Carol learned to love football, and Jack supported her love of horses becoming very fond of them himself, even sharing in the daily chores of caring for these beautiful animals. God was always number one in their marriage. Sharing their Catholic faith, they raised their children teaching us the importance of prayer, attending Mass regularly, and even though it was tough made sure that we had a Catholic education. When Jack became sick and could no longer be cared for at home, Carol went to live with him in the Nursing Home.

"In sickness and in health

To love and cherish, Till death us do part.

"You made it Dad!

We're sure the Lord welcomed you home and said,

"Well done good and faithful servant!" You are so very loved!!

A private funeral service will be held for the family.

Longfellow Finnegan Riddle Funeral & Cremation Service is entrusted with Jack's funeral arrangements. You may pay your condolences at www.longfellowfinneganriddle.com.

To plant trees in memory, please visit our Sympathy Store.
Published by The Montana Standard on Jan. 13, 2021.
MEMORIAL EVENTS
Jan
14
Visitation
4:00p.m.
Longfellow-Finnegan Funeral Home
107 Oak St, Anaconda, MT 59711
Funeral services provided by:
Longfellow-Finnegan Funeral Home
GUEST BOOK
1 Entry
Mr. Oberweiser was a man of dignity whether teaching the dreaded math, coaching the teams or driving the street sweeper during the summer months. He was a powerful presence. To the Oberweiser family, I am sorry for your loss but grateful for knowing him. God bless you all.
Kathleen McCarvel Nims
January 18, 2021