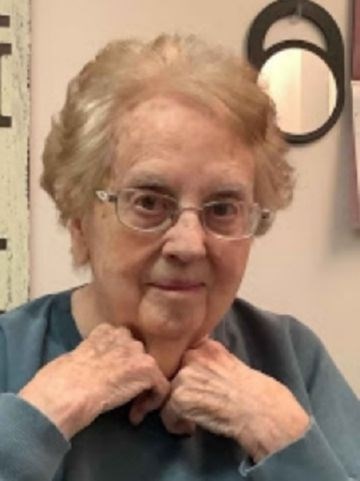 We didn't shake hands or even look each other in the eye.

Etching 'X's in the sky,

On January 8, 2021, a bluebird day, not a cloud in the sky, on the kind of day Louise loved the most, she quietly passed away…another victim of COVID.

Louise Agnes Sletton was born in Anaconda, Montana on July 5, 1928 to Edwin Christopher Sletton and Agnes (Carter) Sletton becoming the beloved baby sister to three older brothers: Sidney, Harold and Albert. She grew up on Chestnut Street in Anaconda attending local schools and graduating from Anaconda Senior High in 1946.

Louise began working shortly after graduation as a teller at the old Daly Bank on the corner of Park and Main and enjoyed the kind of professional career most women didn't experience in the mid nineteen hundreds. The bank went through many changes over the years and so did Louise. The bank morphed into First National, then Northwest, then Wells Fargo and Louise steadily worked her way into a vice presidential position as a loan officer. She retired in 1990 after working in the banking industry for 44 years.

A member of St. Mark's Episcopal church, she was formally licensed a Lay Eucharist Minister, authorized to preside over services and take the Sacrament to the ill or infirm according to the guidelines established for the Diocese of Montana.

Active in the Anaconda community, Louise was a member of the Soroptimist, the Rotary, the Anaconda Writer's Group, Toastmasters, and the Eastern Star. She loved golf and was an early member of the Anaconda Country Club. Mostly though, Louise loved to fish, hike and camp in Montana's beautiful outdoors. Her and her brother, Harold, enjoyed many excursions into the mountains often accompanied by their dear friends, Lowery and Margorie Kunkle.

Louise loved all animals, birds, trees, and wildflowers writing numerous poems, essays and short stories centered on her love of the natural world. But a tribute to her would not be complete without mentioning her special, lifelong love of cats. Louise always had a cat or two prowling around her house, mostly the Siamese variety. Her latest "sweet angel baby", Bonnie, passed a year before she did.

Known to her family simply as "Auntie", she is proceeded in death by her parents, her brothers, Sidney, Harold and Albert and the children and grandchildren of her bothers whom she loved like they were her own. She is survived by nieces and nephews Sandy Sletton Chestnut, Carol (Richard) Miller, Shirley Niles, Dan (Melanie) Sletton, Marvin Sletton, Vera Sletton Haffey, Mary Martelli, Pat Carson, Jane Solan, and Ken Kemper. Also surviving are numerous great nieces and nephews including Chad Germer, Bill Germer, Brandon Miller, Eric Taylor, Danielle Katie Sletton, Serena Sletton, Dean Sletton, Carla Forward, Angela Puckett, Ross Sletton, Haley Haffey, Danny Haffey, and Angela Haughey along with many great-great nieces and nephews.

In lieu of flowers, memorial gifts can be sent to Pintler Pets, 80 Silver Street, Anaconda, Montana, 59711.

A memorial celebration will be held sometime when COVID is no longer a threat.

"So much sorrow, so much dyin

Pharaoh keep a-preachin but he never had a plan

Weepin in the Promised Land

Weepin in the Promised Land.

Longfellow Finnegan Riddle Funeral & Cremation Service is entrusted with Louise's funeral arrangements. You may pay your condolences at www.longfellowfinneganriddle.com. 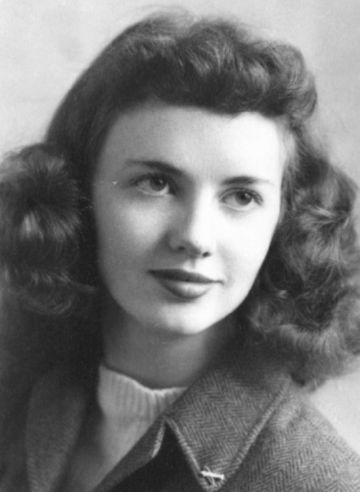 To plant trees in memory, please visit our Sympathy Store.
Published by The Montana Standard on Jan. 13, 2021.
MEMORIAL EVENTS
No memorial events are currently scheduled.
To offer your sympathy during this difficult time, you can now have memorial trees planted in a National Forest in memory of your loved one.
Funeral services provided by:
Longfellow-Finnegan Funeral Home
GUEST BOOK
1 Entry
I will miss sweet Louise forever. I only got to know her for a few months, but she was the kindest woman. I loved reading her poetry, taking walks, and admiring this beautiful world we live in together. Rest in peace beautiful angel! Wishing her amazing family endless healing and appreciation. Hold onto those precious memories. They will bring you some comfort. -Jessamyn
Jessamyn
January 16, 2021