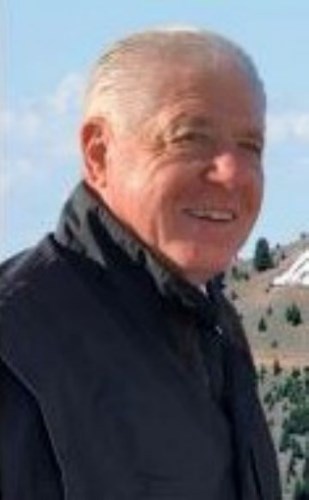 Mick Harrington lived a big life - serving, protecting and bringing love and happiness to others until he passed away surrounded by family on September 8, 2021. Mick was born John Leo Harrington on October 9, 1937, in Butte, Montana. He was as lion-hearted as his name foretold. Butte is known for nicknames, though, and soon after his birth, his family dubbed him Mickey. Mick was the fifth of six children to Tim and Josephine Harrington. He was the basketball team manager at Boys Central High School. He earned his bachelor's degree from Western Montana College. He also played baseball and boxed. He went on to serve two years in the United States Navy. On August 22, 1959, Mick and his high school sweetheart, Teddy (another Butte nickname), said "I do" to what would be their beautiful life together. A few years later, their first daughter, Joyce, arrived. It was in these early days that Mick said yes to the adventure of a lifetime - leaving his beloved family in Butte, and traveling on his own to train at Quantico and join the FBI. His first field office as a special agent was in Arizona, where Mick and Teddy's second daughter, Laura, was born. Mick was transferred to Oklahoma, where they were blessed with their third daughter, Joan. As the family put down roots in Tulsa, Mick enjoyed golf and supporting his girls' activities. He loved Joanie's hunter jumper horse shows and went on to serve as president of the Oklahoma Hunter Jumper Association. Mick and Teddy celebrated their 50th wedding anniversary in Butte with their family, and their love story continued until 2010 when Teddy passed. But once again Mick said yes to life - traveling, supporting his six grandchildren in their activities and golfing with the "lunch bunch" at Indian Springs Country Club. In 2016, Mick said yes to serve again, this time as a volunteer with the Tulsa County Sheriff's Office Cold Case Task Force alongside other retired law enforcement friends. He cared deeply about the cases and was featured in an Investigation Discovery true-crime documentary. Mick lived his big life to the end, shooting at or near his age in golf even to this year. He never sought a spotlight for his acts of generosity. He remembered everything. Every birthday, every name, every historical fact, every golf hole he ever played, every arrest he ever made, every bird species he attracted to his feeders. It made him the best storyteller. Mick was strong in every way - in his Catholic faith, his patriotism for America and his support for others. But for all his strength, he rooted for the underdog, slipped bites of food to family dogs under the dining table, and was a softie for polka music. He was funny and humble, brilliant and brave. He was simply our hero. Mick is survived by siblings Dorene Shaul and Bob Harrington, his daughters Joyce (John), Laura (John) and Joan (Drew), his grandchildren Avery (Kyle), Anson, Piper, Meredith (Matt), Marin and Morgan, and numerous loving nieces and nephews. You may view a video of Monday's service at https:////www.youtube.com//saintbenedicts.

Published by The Montana Standard on Sep. 14, 2021.
To plant trees in memory, please visit our Sympathy Store.
MEMORIAL EVENTS
To offer your sympathy during this difficult time, you can now have memorial trees planted in a National Forest in memory of your loved one.
MAKE A DONATION
MEMORIES & CONDOLENCES
3 Entries
So sorry! I played baseball with Mick at Western Montana College in 1961 He was always a leader
Hugh Ouellette
Friend
September 15, 2021
I was so sad to read about the passing of Mick. Our friendship went way back to our boxing days under the tutelage of Lou Mihelich at the Holy Savior gym back in the early 50's. We remained friends all through High School, graduating together from BCHS in 1956 and reading today's obituary brings back the wonderful times we had there. Mick was one of the good guys and I was so pleased to read of his successful and meaningful life and living in full alignment with it's values. RIP Mick. My condolences to the family, John Fabatz
John/Charlotte fabatz
September 14, 2021
Mick was truly one of my heroes. He was one of the kindest men I know. I was so fortunate to work on the cold case task force with him. He always was humble, kind, and had that unmistakable quick witt. He and I hit it of immediately and even though I left we always kept in touch. From one Navy vet to another..,Mick fair winds and following seas shipmate. Love you my friend.
Kimberly Nash
Friend
September 14, 2021
Showing 1 - 3 of 3 results