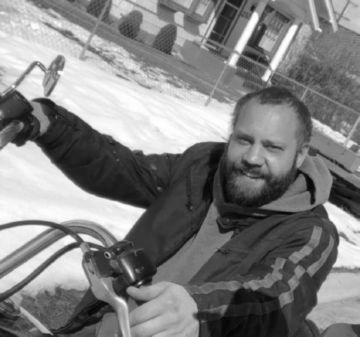 It is with heartbreak and sadness that Steven Arthur Anderson passed away in Missoula Montana on June 18, 2021, surrounded by family.

Steven was born in Missoula Montana on February 24, 1990. Shortly after birth they moved to Butte Montana. This is where all his adventures began.

As a child, he was a mischievous happy go lucky kid. He loved to be outdoors doing things that consisted of hunting, fishing, or just being in the woods. As long as he was outside he was happy. He roamed the town bike riding with his closest friends, Ryan, Ethan, Chazz and his brother Chris. They remain friends to this day.

Steven was a quirky individual. He had the crabby look to his face but that is not who he was. Rather, he was a man full of sense of humor. He could make a person so angry one minute and have them laughing in seconds.

At the young age of 15, with his father mentoring him, he found his calling as a chef. His first and only job at Casagrandas steak house. Steven met many coworkers whom he considered as family. He never met a stranger!

Although, they butted heads he looked up to his bosses Carrie Leary and Lisa Randall. During his 16 years they became his second moms. He could rely on them for advice, opinions and compassion.

In 2013 Steven became a dad to Daniel four days after his birthday. A bond That was immeasurable. They were inseparable. He met the love of Life, Miquella. They married on March 17, 2021. He became a stepdad to Nakole. He loved and adored his family and they were his everything.

To my loving husband,

Published by The Montana Standard from Jun. 24 to Jun. 27, 2021.
To plant trees in memory, please visit our Sympathy Store.
MEMORIAL EVENTS
To offer your sympathy during this difficult time, you can now have memorial trees planted in a National Forest in memory of your loved one.
Funeral services provided by:
Simple Cremation Montana
MAKE A DONATION
MEMORIES & CONDOLENCES
Sponsored by Simple Cremation Montana.
5 Entries
I am so sorry to hear of Steve's passing...i remember him always being one of my boys coming home with Ryan. My prayers to the family and his friends. May his smile and light always be remembered...
Sherry Taylor
Friend
June 25, 2021
So Sorry Miquella. I wish I could take your pain away. Steven will always be missed and loved.
Doreen A Mitchell
June 24, 2021
So so sorry guys for your loss
Lori Dooner
Friend
June 24, 2021
Rest In Peace Stevie
Mary E Gallagher
Family
June 24, 2021
I am so sorry for your loss. You are forever in my heart and prayers. He was such a good guy. Gone way too soon
Amy Horne
June 24, 2021
Showing 1 - 5 of 5 results