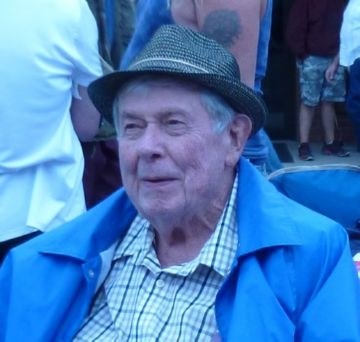 Walter Bruce Grimes of Butte was born to Walter and Thelma (Jensen) Grimes in Dillon, Montana on August 28, 1928. He died at age 92 on April 21 in St. James Hospital in Butte, Montana. Bruce was baptized and confirmed in the Episcopal Church in Dillon and often said he had an ideal childhood. While attending school he excelled in Music, especially playing the trombone. He admired his music teachers, Mr. Gregory and Fred Honeychurch and attended the University of Montana for two years with a scholarship in music.

Bruce married Doris Beck of Anaconda in 1950. After enlisting in the Air Force, they lived in Texas for four years. The family returned to Montana for a time and in 1965, they moved to California. Bruce was very proud of his four children. He and Doris later divorced.

Bruce returned to his beloved Montana in 1977, where he met and married Bonnie Haugen in 1978. They shared 43 years together. Bruce had a variety of work experience from Air Traffic ControlOperator in the Air Force to musician in a dance band. While employed as a custodian in the Federal Building in Missoula, he built bookcases to complete District Judge Russell Smith's new library andreceived a letter of commendation and appreciation for his design and construction from the judge.

After retirement Bruce was able to enjoy camping, fishing and gathering wood. Many lively card games were enjoyed at the big round oak table with laughter, eye rolls and groans accompanying each play. Bruce especially appreciated a good game of pinochle with his favorite partner, Mac Widdicombe. The whole extended family learned how to play "Oh, Heck" and they passed it on to friends andother family members. He and Bonnie looked forward to the short visits with grandson Danny and Becky Ricci when they arrived with groceries for the old folks!

He devoted much of his time to working with wood, designing and crafting various pieces of furniture. He felt honored and blessed tofollow Pete Godtland's design and plans for a new pulpit for Gold Hill Lutheran in Butte, where he and Bonnie lived after retirement. Pastor Merv Olson provided visits and words of encouragement during this project. Bruce became a member of Gold Hill Lutheran Church.

Bruce was preceded in death by his parents and sister, Eileen Stephens; also Dan "Bucko" Ricci and David Ricci. He is survived by his wife, Bonnie Grimes and her four daughters: Margaret Ricci and Pat Forsman of Anaconda, Barbara (Charles) and Addie Haugen of Missoula His four children survive: Lawrence (Melinda) Grimes, James Grimes, Melonie (Al) Delsid and Daniel (Carol) Grimes as well as nine grandchildren, 8 great grandchildren and a niece, T.J. Vietor. Bruce was thankful every day for his many years of sobriety in Alcoholics Anonymous. Services will be scheduled at a later time. Express condolences at www.wayrynen-richards.com.

To plant trees in memory, please visit our Sympathy Store.
Published by The Montana Standard from Apr. 30 to May 11, 2021.
MEMORIAL EVENTS
No memorial events are currently scheduled.
To offer your sympathy during this difficult time, you can now have memorial trees planted in a National Forest in memory of your loved one.
Funeral services provided by:
Wayrynen-Richards Funeral Home
MEMORIES & CONDOLENCES
Sponsored by Wayrynen-Richards Funeral Home.
1 Entry
Bonnie and family, We are so sad about Bruce!!! Our thoughts and prayers are with you all! Dr. Taverna and Cheryl
Cheryl Wegley
May 18, 2021