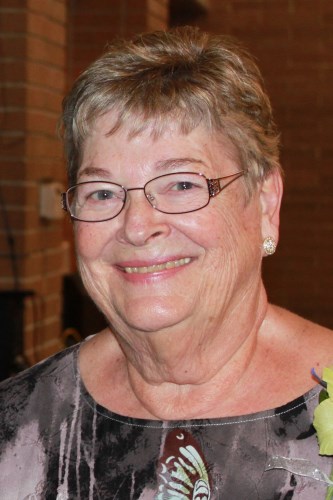 Nancy Miller, formerly of Muscatine, died Thursday, January 6, 2022, at her home in Mesa, AZ of complications from ALS. She was 82.

Nancy Elizabeth Potter was born Sept. 22, 1939, the second child and only daughter of Donald B. and Mildred E. (Cone) Potter. She lived in Greeley, Iowa before the family moved to Manchester, Iowa. She graduated from Manchester High School and attended Iowa Wesleyan and the University of Iowa where she was a member of the Scottish Highlanders. She remained an avid Iowa Hawkeye fan.

On June 11, 1961, she married Fred Dean Miller at the Methodist church in Manchester. They made their home in West Union, Muscatine, Le Mars, and Manchester, Iowa before moving to Mesa, AZ. Fred and Nancy celebrated their 60th anniversary in June 2021.

Nancy was an artist and community volunteer. She belonged to T.T.T., P.E.O., served on the Floyd Valley Hospital Auxiliary, and worked with many other organizations. She was a prolific painter, seamstress, quilter, and creator of folk art that decorated the homes of people across the Midwest. She also knitted uncounted numbers of hats and booties for The Preemie Project at the University of Iowa Children's Hospital.

Surviving to celebrate her memory are her husband, Fred, of Mesa, AZ; children Fritz (Joni) of North Sioux City, SD, David (Stephanie) of Chandler, AZ, and Betsy (Cindy) of Spring Lake, NC; and 10 grandchildren. She is also survived by a brother, Jim (Bev) of Urbandale, IA, cousins and numerous nieces and nephews.

She was preceded in death by her parents, an infant son William James, and brother, Bill Potter.

Services are Thursday, Jan. 13 at 2:00pm at Gold Canyon United Methodist Church. Burial will be in the spring at Oakland Cemetery, Manchester, Iowa.

Published by The Muscatine Journal on Jan. 11, 2022.
To plant trees in memory, please visit the Sympathy Store.
MEMORIAL EVENTS
Jan
13
Service
2:00p.m.
Gold Canyon United Methodist Church
IA
MAKE A DONATION
MEMORIES & CONDOLENCES
3 Entries
WE HAVE MANY FOND MEMORIES OF NANCY;, FRED AND THE MILLER FAMILY..OUR THOUGHTS AND PRAYERS ARE WITH ALL...NANCY WAS A FUN AND LOVING PERSON AND GAVE TO MANY WITH HER HELP AND SUPPORT,,RICH SEVERSON
RICH SEVERSON
Friend
January 12, 2022
Fred and Family - Nancy and I were on the Iowa State T.T.T. Board together, and what a great time we had. Nancy was fun, dedicated and her laugh was delightful. So many memories - she was a dear friend and I give you my sympathies.
Judy Swift
Friend
January 11, 2022
Our deepest sympathy to the family.
John and Cheryl Weaver
January 11, 2022
Showing 1 - 3 of 3 results