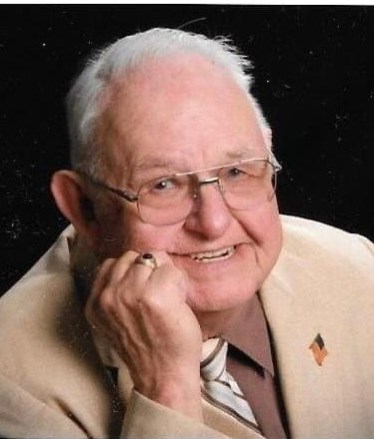 Mr. Owens was born May 1, 1927 in Baltimore, Md, the son of the late Harry LeRoy (Buck) Owens and Rebecca Elizabeth (Jarrell) Owens of Middletown, DE. The family moved to Betterton in 1939 when Donald was 12. He graduated from Chestertown High School, class of 1943. He was a member of the CHS Alumni Assoc. and enjoyed attending their annual picnics. He was a member of the Kent County Commission on Aging for ten years, serving as its secretary for several years. Don was a member of the Betterton-Still Pond Golden Age Club Senior Group. He served the group as president, treasurer, and chaplain, and enjoyed their monthly luncheons and the friendship of their members. He was also a member of the Rock Hall Senior group. Don often went to the Amy Lynn Ferris Adult Activity Center in Chestertown for lunch with friends and to shoot pool with the fellows.

Don was an agent with Prudential Insurance for 28 years, retiring in 1986. For 8 years Don volunteered on Wednesdays at Hidden Treasures in Chestertown for Kent Center, Inc., and drove their van part time. He was an original volunteer for the Kent County Sheriff's Telephone Reassurance Program when it started in 2002. He left his volunteer jobs to take care of his wife after her stroke in 2004. He was her caretaker until her death in July, 2006. After her death, he returned to the Telephone Reassurance Program and also volunteered in-house at the Chester River Hospital.

Besides his parents, he was predeceased by his wife of 56 years, Regean (Jean) Brobst Owens. He is survived by a daughter, Donna Jean Owens of Jacksonville, FL., four sons: Bruce, of Betterton; Paul, of Lynbrook, NY; Glenn, of Worton; and Clifton, of Mullica Hill, NJ., a sister, Betty Jane Ale of Bridgeton, NJ, ten grandchildren, thirteen great-grandchildren, and a special friend, Beverly Carter of Chestertown.

Mr. Owens was a World War II veteran in the U.S. Navy and came out of the Naval Reserve as Storekeeper First Class. He was a life member and the last surviving charter member of the C. Henry Price II, Post 246 American Legion in Betterton, serving as its chaplain. He was a life member of Post 652, Veterans of Foreign Wars in Millington, and a member of the Kent Ruritan Club, serving as its treasurer and chaplain.

Don served 18 years on the Betterton Town Council. He was a member of the First United Methodist Church in Chestertown, and active all his life in volunteer firefighting and fire police. He was a life member (78 years) and fire police with Betterton Volunteer Fire Co. He has also been a member of Kennedyville and Chestertown Volunteer Fire Companies, as well as Hartly, DE VFD.

Mr. Owens was a charter member, life member, and first president of the Kent County, Md. Fire Police Association when it was formed in 1987. He later served terms as vice president, secretary, and treasurer. He was an honorary life member of the Kent County DE Fire Police Association and a past president of the Kent and Queen Anne's Volunteer Fire, EMS, and Rescue Association, serving as its secretary/treasurer for several years, and was a member of its Hall of Fame. He proudly served as chairman of the association's memorial services each May, honoring the recently deceased members of the fire companies and lady's auxiliaries.

Don loved baseball and was an avid fan (since the 1950's) of the Wilmington Blue Rocks, attending games regularly with his son Bruce. Before that he traveled with his father to see the Eastern Shore Leagues baseball games. In his younger years, Don was a duck pin bowler, especially the rubber-band pins in the early Betterton alleys. Later he bowled for many years on duck pin leagues in Chestertown.

A viewing will be held on Sunday, August 29 from 6 to 8 pm in the Galena Funeral Home of Stephen L. Schaech, Galena, MD and on Monday, August 30 from 11 to 1pm, with funeral service at 1pm. Burial will follow in Still Pond Cemetery.