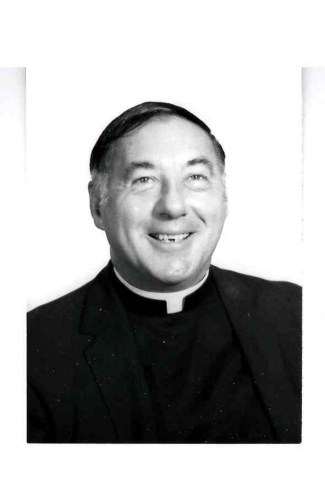 Son of the late Catherine (McCaffrey) and Albert Peterman of Milford Delaware passed peacefully at Millcroft in Newark, Delaware.

Father Peterman was ordained in 1957. After his ordination, he was assigned to parishes with high schools where he taught first at Corpus Christi in Elsmere, and then served as principal successively in Holy Cross Dover and at St. Elizabeth in Wilmington. Having studied piano at Peabody Preparatory School while a seminarian in Baltimore, he used his musical abilities over the years conducting choirs and glee clubs and producing several high school musicals.

At the time of the diocesan Centennial, he completed and published his first book entitled, Priest of a Century, which presented a picture and biographical sketches of each deceased diocesan priest up to that time.

In 1970, he was appointed pastor of Good Shepherd Church in Perryville, Maryland, with missions at Rising Sun and Port Deposit. Four years later he became pastor of St. Mary Magdalen Church in Sharpley, Wilmington, where he served nine years. While pastor there he earned and received a doctorate degree in United States history from Catholic University in Washington, D.C. His dissertation on the founding of the observance of the U.S. Bicentennial program of "Liberty and Justice for All." As part of that program, he contributed a series of historical articles for publication in the Dialog, the diocesan newspaper. He continued that series over a number of years.

In 1983, he was appointed pastor of Holy Cross Church in Dover, his birthplace. After four years there, he was transferred to Sacred Heart Church in Chestertown, with a mission church in Rock Hall. While pastor there, he published a third book entitled, Catholics in Colonial Delmarva. In 1994, he was transferred to St. Dennis Church in Galena, Maryland, where he completed and published three more volumes on diocesan history.

After a term of 12 years in Galena, he retired from the pastorate at age 75. He continued to minister regularly in Delaware and Maryland until his death at age 90, on August 3, 2021. He was honored and proud to serve as a priest for 64 years.

Father Peterman was devoted to his family and friends. He enjoyed gatherings at his cottage, trips to Rehoboth Beach, boating, playing croquet and watching beautiful sunsets. He was known for being an excellent storyteller, had a wonderful sense of humor and was considered a true lover of nature and animals. His presence at family holiday gatherings leading Christmas Carols, his wisdom, knowledge of history, zest for life, generosity and good nature will surely be missed.

Donations in his memory may be made to the Diocesan Priest Retirement Fund in care of the Chancery Office, P.O. Box 2030, Wilmington, DE 19899.

Letters of condolences may be sent to www.traderfh.com
Published by Kent County News on Aug. 8, 2021.
To plant trees in memory, please visit the Sympathy Store.
MEMORIAL EVENTS
Aug
10
Viewing
9:00a.m.
Holy Cross Church
631 S. State Street, Dover, DE
Aug
10
Mass of Christian Burial
Holy Cross Church
DE
Funeral services provided by:
Trader Funeral Home, Inc.
MAKE A DONATION
MEMORIES & CONDOLENCES
Sponsored by Trader Funeral Home, Inc..
7 Entries
I received all my sacraments from you father, following you from Chestertown to Galena. Happened to look you up today to find you´ve gone home. You were amazing. In my heart forever. Tell Betty and Joey Fahrman I said hi.
Amber Fahrman
August 16, 2021
Father Peterman had a cottage close to mine on the Elk River. I enjoyed our talks over the years. Talked to him last summer, and his mind was still very sharp. I´m sorry to learn of his passing.
Russell Field
August 13, 2021
I have had the privilege and honor of knowing Father Petterman since he arrived at Corpus Christi. I and several classmates had awesome times at the boat and friends´ pool. In fact, he kept me from drowning when some of my FRIENDS? threw me in the pool (I couldn´t swim). A friend tried to help me, but I almost drowned him trying to save myself. Father jumped in and pulled me out. I recently received a letter from Father, reminiscing "old times". I and another classmate, Jack Mahoney, had lunch with Father a few months ago at his favorite restaurant, Crossroads, where we again shared some of the good times. Father was a brilliant man and a good friend and adviser. He will be missed by me and many, many others whose lives were impacted by him. RIP.
Joe Miller
Friend
August 10, 2021
Fr. Peterman was truly a model Catholic priest. As a young child, I remember him from St. Elizabeth Catholic Church and the kindness he showed our family has stayed with me all these years. There is no question he is among the saints (surely singing his heart out). A wonderful man and priest whose family can take comfort in knowing their loved one has left many lasting impressions in those he counseled. Heaven is much brighter with Father Peterman there.
A. Carter
Other
August 9, 2021
God´s good man and my friend. He was blessed with a long life of service and appreciative of those who worked and helped in any way. I was lucky to be part of his team.
Connie & the Sadusky family
Friend
August 9, 2021
I send my sincere condolences to the Peterman family on the loss of your loved one Thomas. May 1 Thessalonians 4:14 bring you some comfort in knowing that there is a hope for the ones we have lost in death, because they are precious in God's eyes. May the God of all Comfort strengthen your family during this time of deep sorrow.
DL
Other
August 9, 2021
Offering our deepest condolences during this difficult time.
From the Staff of Trader Funeral Home
August 9, 2021
Showing 1 - 7 of 7 results