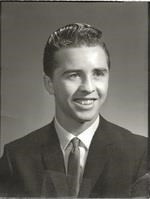 BORN
1937
DIED
2021
FUNERAL HOME
WILLIAMSON-AIRSMAN-HIRES FUNERAL HOME
1405 Lincoln Avenue
Jacksonville, IL
William M. "Bill" (Rosson) Martin
Land O' Lakes, Florida - William M. "Bill" (Rosson) Martin, 84, of Land O' Lakes, FL, and formerly of Jacksonville went home to be with the Lord on Wednesday, September 22, 2021, at home with his family by his side. He was born on September 6, 1937, in Jacksonville, the son of Raymon Rosson and Hazel (Smith) Martin. He married Roxy A. Elliott on December 24, 1961, at the First Baptist Church in Jacksonville.
He is survived by Roxy, his devoted wife of 59 years, sons Jeff and Jamey, all of Land O' Lakes; sisters, Phyllis (Jim, deceased) Scott; Judy (Grover, deceased) Hoots; and Nancy (Don) Rapp, all of Jacksonville; a brother, Wayne (Kay) of Springfield, and several nieces and nephews. He was preceded in death by his parents, stepfather, Estel Martin, brothers Ray (Dee) of Colorado Springs, CO; Earl (Linda), Ron (Penny) and Fred, all of Jacksonville.
Bill was a 1955 graduate of JHS. He served in the US Air Force, stationed in Japan. He loved baseball and coached Little League and umpired baseball and softball for many years. He served as ASA Commissioner for many years organizing regional, sectional, and national softball tournaments in Jacksonville.
He was a devoted golfer and after retiring from the City of Jacksonville he moved to Florida in 2008 to play daily on a course right outside his back door. Besides getting two hole-in-ones, his biggest thrill was to attend The Players PGA tournament at TPC Sawgrass in 2009. He also loved his Chicago sports teams and saw championships from the Cubs, Bears, Bulls and Blackhawks.
There will be no visitation or services. The family would like memorials to be sent to the First Baptist Church in Jacksonville. The Williamson Funeral Home is in charge of arrangements. Condolences may be left online at www.airsman-hires.com

Published by Jacksonville Journal-Courier on Sep. 24, 2021.
To plant trees in memory, please visit the Sympathy Store.
MEMORIAL EVENTS
To offer your sympathy during this difficult time, you can now have memorial trees planted in a National Forest in memory of your loved one.
Funeral services provided by:
WILLIAMSON-AIRSMAN-HIRES FUNERAL HOME
MAKE A DONATION
MEMORIES & CONDOLENCES
3 Entries
I am deeply saddened to hear about Bills passing. I know he will be missed. Many prayers being sent your way, Roxy.
Penny Moore-Garner
Friend
October 1, 2021
My deepest sympathy to Roxy and family. Remembering Bill as an Umpire of softball and friend. Boy, did we always have a good laugh and lot of fun on the field or at a restaurant when he and family was around. He was one of a kind. May all your memories help you through this difficult time.
Carol E. Stout
September 25, 2021
Bill was such a nice guy. I picture him on a ball field. My sympathies to Roxie, Jeff and Jamey along with Sis, Judy, Nancy and Wayne.
Jane Farmer
Family
September 25, 2021
Showing 1 - 3 of 3 results