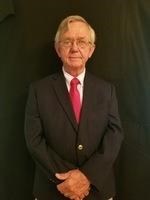 BORN
1944
DIED
2020
ABOUT
Blacksburg High School
Huston I. Huffman
November 24, 1944 - July 25, 2020
Myrtle Beach, South Carolina
Huston I. Huffman, 75, of Myrtle Beach, South Carolina, passed away on July 25, 2020.
Born in Cherokee County, South Carolina on November 24, 1944, he was the son of Theodore Huffman and Maggie Wilson Huffman.
Huston was a graduate of Blacksburg High School in 1963 where (his wife just found out) that he was chosen the Most Intellectual, and Wofford College in 1967 with a degree in mathematics. After graduation, he married his beloved wife, Rena Huffman, and they shared 53 wonderful and happy years together. After completing his service in the US
Army from 1968-1971 and a tour in Germany, he completed his graduate work at the Institute of Textile Technology in Charlottesville, Virginia, with a Master of Science in Industrial Management. Huston had an extensive career in engineering and management within the textile, paper, and ink manufacturing industries. After years of managing plants, he decided to go into business for himself. He started and as President successfully operated a General Contracting Firm.
He and his wife retired to Myrtle Beach in 2006, moving into the Town of Briarcliffe Acres. He loved the neighborhood and donated endless hours to the improvement of the town. He was elected to the neighborhood Homeowners Association Board for three years serving as President for one year, was elected to serve on the Town Council for four years, and then elected Mayor for 2 terms from 2016-2023. During his tenure as mayor, he spearheaded many projects and assisted the town in weathering many hurricanes. He was known for always being available and more than willing to help his neighbors when needed. With his positive outlook and creative mind, he was able to accomplish much in his lifetime.
Huston had many interests. He obtained his pilot's license, taught astronomy, and enjoyed making wine. He obtained one level below master in chess competition. He was a member of Mensa, an avid reader, enjoyed traveling with his wife, playing golf and other outings with his retirement friends.
He is survived by his wife, Rena, sister, Christine Bridges, and his brother, Calvin Huffman, and many loving nephew and nieces.
A Celebration of Life will be held at a later date. Donations in his honor can be made to the Children's Tumor Foundation (ctf.org) or a charity of your choice.

Published by The Sun News on Jul. 28, 2020.
To plant trees in memory, please visit the Sympathy Store.
MEMORIAL EVENTS
To offer your sympathy during this difficult time, you can now have memorial trees planted in a National Forest in memory of your loved one.
MAKE A DONATION
Please consider a donation as requested by the family.
MEMORIES & CONDOLENCES
0 Entries
Be the first to post a memory or condolences.