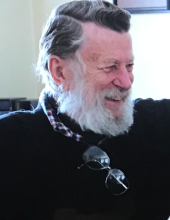 ABOUT
Oliver Ames High School
FUNERAL HOME
Chapman Funerals & Cremations - Bridgewater
98 Bedford Street
Bridgewater, MA
Lambert M. Anderson (more often known as "Bert" or "Papa") is sure going to be missed. Bert passed away peacefully at his home in Bridgewater on November 2, 2021, with his wife Rosemary at his side, just 15 days shy of his 82nd birthday.
Originally from North Easton, he grew up with his sister Constance Dumoulin, got married, and raised his own family. He graduated Oliver Ames High School in 1957 and earned degrees from Northeastern University and Bridgewater State College. He promptly joined the Foxboro High School math department where he remained for 33 years. He took his due turn as Department Chair, advisor to so many groups such as chess club, National Honor Society, and college bowl, but is best remembered by students for his leadership in theater and laughter and learning in the classroom. But maybe his most striking accomplishment was marrying his childhood crush, the beautiful girl from down the street, Rosemary Sabin, his wife of 57 years. Together they raised four children Mark, Erik, Kristen, and Julie-Lynn. While we are about to describe his accomplishments and passions, there's no denying that nothing brought more joy to his life than his grandchildren, Kierrian, Tanner, Joslyn, Benjamin, Nicholas, Brigid, Michael, Samantha, and Sadie.
Bert was originally an active member of the Covenant Congregational Church of North Easton, of which his grandparents were founding members. He later joined the Unitarian Universalist church in Bridgewater. Whatever his church membership at the time, Bert enjoyed writing and presenting his own sermons and the congregation was always in for a treat.
Speaking of treats, those who know Bert, know that being invited over for a meal was just that. Bert had a knack for cooking for a crowd. Any night, any time was a valid reason, but Christmas Eve Smorgasbord and Thanksgiving dinners were his favorites. (How are we going to know this year if we've rolled those Swedish meatballs to just the precise size?!)
Those who knew Bert would describe him as both intellectual and curious. He was always learning something of interest or had his nose in a new book. When he wasn't reading you could find him in the kitchen preparing a meal, sharpening his skills at the chess board, or sitting in front of the TV tuned in to old movies, sitcom reruns, or the sporting event of the season.
Papa was a lover of the old-school road trip: folded maps, magnifying glass, binoculars, and Bill Mosher's jacket was all he required. It should be included that this man knew how to camp in style. Breakfast time would find Bert serving up pancakes to anyone in the campground (who would get up early enough) and closing out the day with his family and friends singing and storytelling around the nightly campfire.
To help us remember Bert, relatives and friends are welcome to attend visiting services on Sunday 2-5pm and a funeral service on Monday at 11am, both at Chapman Funeral Home. Burial in South Easton Cemetery will be at a later date. As Papa would say: "Thanks for being here. Love you 50!"
In lieu of flowers, please send donations to either of two organizations that represent Bert's passions of reading, chess, and theatre: the Bridgewater Public Library, which now provides a home to his local chess club, and The Gamm Theatre of Warwick, RI, to which he was a season ticket holder until his death.
Published by Chapman Funerals & Cremations - Bridgewater on Nov. 5, 2021.
To plant trees in memory, please visit the Sympathy Store.
MEMORIAL EVENTS
Nov
7
Visitation
2:00p.m. - 5:00p.m.
Chapman Funerals & Cremations - Bridgewater
98 Bedford Street, Bridgewater
Nov
8
Funeral service
11:00a.m.
Chapman Funerals & Cremations - Bridgewater
-, -
Funeral services provided by:
Chapman Funerals & Cremations - Bridgewater
MEMORIES & CONDOLENCES
0 Entries
Be the first to post a memory or condolences.