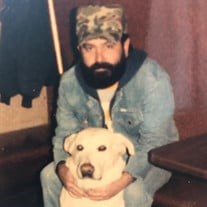 FUNERAL HOME
Law-Jones Funeral Homes - Savanna
309 Chicago Ave
Savanna, IL
"Riding in a flatboat with his dog, on the Mississippi River, was about as close to perfect as life could get for Bruce "Griz" Bowne." On September 16, 2021, at the age of 72, Bruce passed away from complications from a stroke, at Javon Bea Mercy Hospital in Rockford.
Bruce was born December 16, 1948 in Clinton, Iowa, the son of Bruce Van Patten and Claribel Elizabeth (Fulrath) Bowne. Growing up in Savana, he is a 1968 graduate of the Savanna High School. Bruce enlisted in the US Navy in 1969, serving on the USS Oklahoma City during the Vietnam War. He was lucky to serve alongside one of his best friends from back home, Jim Friedenbach (especially because Jim worked in the kitchen.) After his service in the Navy, Bruce hung out in California and bought a Harley Sportster for the ride back home to Savanna.
Once he was back in Savanna, Griz met the love of his life, Becky Newcomb at the old Kennedy's Tavern. They hit it off and have been together forty-six years. When Bruce decided to make a life with Becky, he also decided to make a life with her two sons, Craig and Chad. He was happy being part of a growing family.
As most knew him, Griz worked thirty years at Gene's Oasis Tavern in Savanna and later at CJs Pub. He was friendly and funny, just the right mixture for a bartender. Griz enjoyed playing pool, duck hunting, bowling, but mostly being on the Mississippi. "He loved when he and Becky could grab a bucket of chicken and hit the river." Bruce was also thoughtful, proven by the many birthday cards that he would send out each year, signed "Griz."
Bruce will be dearly missed by his life partner, Becky Newcomb of Savanna; her sons, Craig (Shelly) Newcomb of Bettendorf, IA and Chad (Shelley) Newcomb of Cambridge, IL; their children, Emily (Garrett) Mengler, Olivia and Chase Newcomb; a brother, Butch Swift of Savanna, along his son and daughter, Steve (Carrie) Swift and Stacy Webster. Bruce is preceded in death by both parents; his brother, Spencer Swift; and sister-in-law, Nancy Swift.
A Celebration of Life service will be held 2:00 p.m. Saturday, October 2, 2021 at the Marquette Park Pavilion in Savanna. Military honors will be provided by the Savanna VFW. Friends are invited to share in Bruce's life at lawjonesfuneralhome.com.
Published by Law-Jones Funeral Homes - Savanna on Sep. 19, 2021.
To plant trees in memory, please visit the Sympathy Store.
MEMORIAL EVENTS
To offer your sympathy during this difficult time, you can now have memorial trees planted in a National Forest in memory of your loved one.
Funeral services provided by:
Law-Jones Funeral Homes - Savanna
MEMORIES & CONDOLENCES
3 Entries
Thanks Bruce,You will be missed.
Gary c Goetz
Friend
September 22, 2021
Take the corners slow Bruce. I´m going to miss you. Very proud to call you my friend.
Lyn
Friend
September 20, 2021
You will be missed. With loving thoughts and prayers.
Ellen Grear
Friend
September 20, 2021
Showing 1 - 3 of 3 results