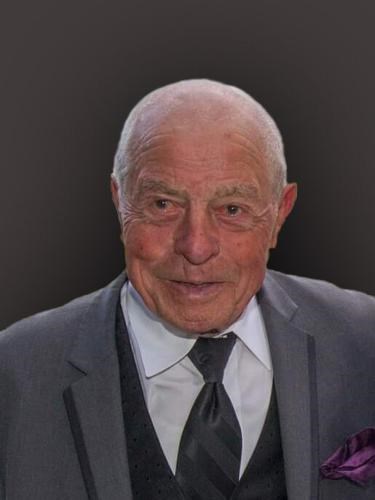 FUNERAL HOME
Edwards Memorial Center - University Place
3005 Bridgeport Way W.
University Place, WA
Obituary of Carlo Mario Santelli
Carlo Mario Santelli
("Mario")
1926 – 2021
The Lord called our family patriarch home early on Monday morning, September 27, 2021. Carlo Mario Santelli was born to Francesco ("Frank") and Raffaella (neé Spina) Alberti Santelli on January 4, 1926, in Pietrafitta, Cosenza, Italy. Following emigration with his older brother Dominic in the early 1950s, Mario lived and worked in Canada laying track and changing railroad ties for the Canadian National Railway. During that time, mutual friends in Tacoma, WA and Vancouver, B.C. introduced Mario to the pretty and petite Dorothy Pavia, also Italian, who resided in Tacoma. After a short courtship, Mario and Dorothy married on October 11, 1952. They lived in Vancouver until they crossed the border on January 27, 1953, and moved to Tacoma's Little Italy (now the Hilltop area).
Mario found a job with the American Smelting and Refining Corporation (ASARCO) at the copper smelter in Ruston where he was employed for five years. He took night classes at the courthouse in downtown Tacoma and became a US citizen. Following strikes at the refinery, Mario found a better job at Calvary Cemetery, and thrived there for seven years, working in the fresh air while pruning flowers, planting trees, digging graves by hand, and doing other odd jobs at the cemetery. People who came to the cemetery hired Mario to do landscape work in their yards and, with the help of three boys from Bellarmine Preparatory School, the seed for Mario's business began to grow. In 1964, Mario and Dorothy officially opened the landscaping company, and a retail nursery in University Place on 27 Street W. Over time, they purchased land in University Place and accumulated more than fourteen acres. Behind Mario's Landscaping was Mario's lush garden where the soil was black and rich. He grew Zinfandel and Muscat grapes for his wine, as well as a bounty of garlic, onions, tomatoes, lettuce, carrots, kale, beets, mustard greens, Italian peppers, beans, and artichokes. Mario planted beautiful gardens at their home and at the lake house as well, blessing his family and visitors with the fresh produce and fruit including apricots, pears, apples, peaches, cherries, Italian plums, and black figs.
The Santellis had three daughters: Christine, Carla, and Nanci while they lived on the Hilltop, and then, they relocated to Fircrest. They were founding members of St. Charles Borromeo Parish. Not long after moving, they welcomed two more children, sons Francis ("Nick") and Matthew. While the children were school-aged and throughout their long lives, Mario and Dorothy spent time and money supporting St. Charles Borromeo Parish and School, St. Leo's School, and Bellarmine Preparatory School. When out of town, they attended Mass wherever they were as their Catholic faith was the cornerstone of their life together.
Friends and family loved Mario's wine and the multi-course Italian meals that Mario and Dorothy served at their home in Fircrest and at the large gatherings held at their lake house on Summit Lake,. After Mario retired, his son Nick took over the landscape business and Mario and Dorothy spent more time at the lake house with Dorothy cooking and reading while Mario worked around the property. A much-loved and vital part of the couple's social life also involved their membership in the Order of Sons and Daughters of Italy in America (OSDIA). For more than 50 years, they were members of Tacoma Lodge #1175 and they worked tirelessly to support local and national lodge activities. Mario and Dorothy enjoyed being delegates and traveling to national events of the OSDIA.
Gone, but never to be forgotten, Mario was predeceased by his parents, Frank and Raffaella Alberti Santelli, his brother Dominic Santelli, his beloved wife Dorothy, infant daughter, Christine, and grandson Adam Santelli. He is survived by their children: Carla, Nanci, Nick, and Matthew (Debra); grandchildren: Sara (Joe), Matthew (Holly), and Justin (Christine); great-grandchildren: Kari, Clover, Carlo, Lilly, and Abby; great-great-grandson Cash; many cousins, and wonderful friends.
The family would like to thank the staff at the Arcadia Medical Resort of University Place (formerly University Place Rehabilitation Center) for their compassionate care of Mario. In lieu of flowers, the family suggests memorial donations to the St. Charles Borromeo School, 7112 S 12th St Bldg 1, Tacoma, WA 98465-1799, noting "in Memory of Carlo Mario Santelli." Donate online at https://www.osvhub.com/saintcharlesb/funds by clicking on the link to "Give Now" to the.
A funeral Mass will be held at 11:00 AM on Thursday, November 11, 2021 at St. Charles Borromeo Catholic Parish. Please join our family for a reception to celebrate Mario's life on Sunday, November 14, 2021, from 2:00 to 5:00 PM at the Fircrest Golf and Country Club, 1500 Regents Blvd, Fircrest WA 98466.
Published by Edwards Memorial Center - University Place on Oct. 27, 2021.
To plant trees in memory, please visit the Sympathy Store.
MEMORIAL EVENTS
To offer your sympathy during this difficult time, you can now have memorial trees planted in a National Forest in memory of your loved one.
Funeral services provided by:
Edwards Memorial Center - University Place
MEMORIES & CONDOLENCES
1 Entry
Would like to Express my sincere sympathy to the Santelli Family. My heart is saddened, and I will miss Uncle Mario. In the time I knew him, he was always loveable, kind, and always willing to help his Family & Church. He was strong in his Faith, and I know he is Rejoicing in Heaven with Aunt Dorothy, Christine, and Adam. My son Chris and I enjoyed working for him time to time. We learned a lot from Uncle Mario about gardening. We loved the Wine he shared with us he made. It truly was A Blessing to be Married to his niece Sue Pavia. God Bless you Uncle Mario, and Thank you for all you did for my Family. Love you, and may you Rest in Peace.
Robert Bockman Jr.
Family
November 7, 2021
Showing 1 - 1 of 1 results