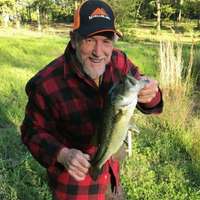 FUNERAL HOME
Lynch Funeral Service - Greenville
4238 HWY 34 South
Greenville, TX
We come together at this time to celebrate the life of Cecil Dwayne Jackson, who recently
accompanied our good Lord on a fishing trip in Heaven, on September 21, 2021. He was proceeded in
death by his parents Cecil and Clara Jackson. He is survived by his loving wife Gwen, brothers: James
and Kenneth, sisters: Joann and Patricia, sons: Jeremy, Philip and Micah, daughter: Sarah, and many
grandchildren.
Dwayne was known by many different names such as Derail, Baby Cakes, Deeeewayne Jackson,
Action Jackson, but he most commonly went by Big Daddy. He was born and raised in Royse City, Texas
where he was known for being the high school quarterback stud and also a main member of the "Nasty
Nine". He was always willing to give a helping hand even if it was nowhere near convenient for him. He
cared about others more than himself and would put everything aside to help out his family, friends, and
even random people walking on the side of the road. He was no doubt the biggest supporter of everyone.
Come game days or even practices if he wasn't coaching, he was always on the sidelines cheering on his
children and most recently his grandchildren. He will definitely be remembered as a man with a huge
heart. He was not only a grandfather to his grandchildren and a father to his own children, but he was
everyone's Big Daddy.
Big Daddy was never known to be boring. His grandchildren put it perfectly when saying, "Even
my friends that only met him once or twice, remembered him as a crazy, energetic, and funny man." If
you ever happened to be in his presence at a game (does not matter what sport), you most likely would
see him performing his crazy dances or hear him yelling his well-known Big Daddy catchphrases. All in
all, there was never a morning, afternoon, or evening without laughing, sometimes to the point of tears if
Big Daddy was involved. He will forever be remembered as our favorite jokester, leader and our best
friend. He left peacefully and without enemies. He was a great God-fearing man with a huge heart and is
loved by all. There is no doubt that the good Lord put him on this Earth to make people laugh and there
was nobody better suited for this task than our beloved Big Daddy.