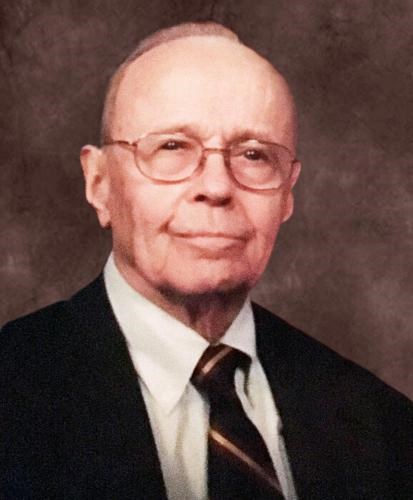 ABOUT
Salem Senior High School
FUNERAL HOME
Stark Memorial Funeral Home and Cremation Services
1014 E. State Street
Salem, OH
Charles Gibbs, 95, died peacefully on Wednesday, October 20, 2021, at the Salem Regional Medical Center. He was born on December 27, 1925, in Salem, and was the son of Russell C. Gibbs and Sara Ellen (Pearce) Gibbs.
Charles was married to his beloved wife, Margaret Works Gibbs, on July 1, 1950, at The First Presbyterian Church of Salem. Together they raised their children, Charles Pearce Gibbs of Freedom, New Hampshire, Ellen Caruso, of Canton, Ohio, Emily Gibbs of Salem, and Margaret Hoople (David) of Falmouth, Maine.
Along with his wife and children, he is survived by his grandchildren, Jeremy Gibbs (Erica,) Marcus Stanley (Cita,) Kendra Veno (Jason,) and Ashley Deem (Anthony,) nine great grandchildren and many nieces, nephews and great nieces and nephews. Charles is also survived by his sister, Elizabeth Thatcher, and was preceded in death by his sister, Nanee Bennett and his brother, James W. Gibbs.
Charles graduated from Salem High School in 1943, and was honored as its Outstanding Alumnus in 1986. He graduated from Adelbert College, Case Western Reserve University in Cleveland, Ohio, with a B.S. degree in Biology in 1948. His education fostered his love of medical sciences that he embraced throughout his life, and served him well during his years in The United States Navy, both in World War II and in the Korean Conflict, where he actively served as a Medical Corpsman, and as a Lieutenant j.g. in the Pacific Ocean.
Charles devoted his 40 year career to financial services and was President of The Society Bank, Salem District, and subsequently Senior Vice President of The Firestone Bank in Lisbon, until he retired in September, 1992. He was a member of The First Presbyterian Church of Salem, and served as a member of its Investment Committee, and also as a Deacon and a Trustee of the church.
As a life-long resident of the City of Salem, Charles was instrumental in developing The Salem High School Scholarship fund, and served for 25 years as its Treasurer and as Chairman of its Finance Committee. Area schools in close proximity sought his advice and expertise in developing programs that emulated the successful Salem model. Charles believed in the attainment of a strong education to develop minds and capabilities for all who aspired to achieve those goals, which he worked diligently to provide for his own children as well as the students of many Salem families.
Charles served as a Councilman for the City of Salem for 12 years, and was the Chairman of its Finance Committee. He was also a member of the Utilities Commission and retired as its Chairman in 1991, after seventeen years. He served as Vice President of R.C.G., Inc., a closely held holding company for real estate development, as President of American Laundry and Dry Cleaning, Inc., as a board member of The Peoples Lumber Company and Trustee of its Employees Profit Sharing Plan.
He also served as Treasurer of The Salem Rotary Club and as a host parent to Eva Lunderquist, the Gibbs' family A.F.S. Swedish exchange student. Charles was a Trustee for Century House, a member of The Salem Golf Club, a member of the Selection Committee of The Salem Hall of Fame and a member of The Grandview Cemetery Board of Trustees.
In addition to his career and civic responsibilities, Charles, together with his wife Margaret, shared a life-time love of collecting American antiques. They worked together in the preservation and remodeling of their home in Freedom, New Hampshire, where they summered with family and friends for more than six decades. In his quiet moments, Charles loved to refinish and paint, but above all to see all of his family, to whom he provided unqualified stability, support, encouragement and love.
Charles' funeral service will be held at The First Presbyterian Church of Salem on Saturday, October 30, 2021 at 11:00 am, with The Reverend Ross B. Jackson officiating. The service will be livestreamed on Stark Memorial Facebook Page at http://www.facebook.com/starkmemorial. There will be no calling hours, but family members will greet friends in the Sanctuary from 10:00 am until the service begins. Interment will be held at Grandview Cemetery following the service.
In lieu of flowers, Memorial contributions may be sent to the First Presbyterian Church at 436 East Second Street, Salem, Ohio 44460, or to The Scholarship Fund of the Salem High School Alumni Association at 330 East State Street, Salem, Ohio 44460.
Arrangements are being handled by Stark Memorial Funeral Home and Cremation Services.
To view Charles' obituary or send condolences visit www.starkmemorial.com.
To send flowers to the family or plant a tree in memory of Charles Gibbs, please visit our floral store.
Published by Stark Memorial Funeral Home and Cremation Services on Oct. 24, 2021.
To plant trees in memory, please visit the Sympathy Store.
MEMORIAL EVENTS
Oct
30
Visitation
10:00a.m. - 11:00a.m.
First Presbyterian Church of Salem
436 E. Second Street, Salem, OH
Oct
30
Funeral service
11:00a.m.
First Presbyterian Church of Salem
436 E. Second Street, Salem, OH
Funeral services provided by:
Stark Memorial Funeral Home and Cremation Services
MEMORIES & CONDOLENCES
0 Entries
Be the first to post a memory or condolences.