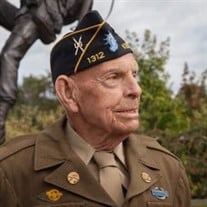 FUNERAL HOME
Heald Funeral Home, Inc. - Plattsburgh
48 Court Street
Plattsburgh, NY
Charles W. Smith, 97, of Rouses Point, N. Y., a resident of 260 Lake Street, Senior Resort Community, passed away of natural causes while under care of Hospice. His daughter and son-in-law were instrumental in providing around the clock care so he could remain in his home and were with hIm when he peacefully passed. Charlie was born in Keene, N. Y., the son of Samuel and Elsie Smith.
Charlie attended school in Keene Valley and had numerous jobs after, including golf caddie at the Ausable Club. In 1943 he was drafted and joined the Army's 10th Mountain Division, serving from April, 1943-November, 1945 during WWII as a combat infantryman. He fought in the Appenines of northern Italy and the Po Valley and received the Purple Heart and Bronze Star along with numerous other commendations.
When the war ended, Charlie worked for local contractors in the Keene Valley area including the local hardware store. He then went to work at Plattsburgh Air Force Base retiring as a maintenance supervisor in 1986 after 20 years. He was also proud of his volunteer service at CVPH for over 13 years until the pandemic hit.
Charlie is survived by his daughters, Brenda Smith of Jacksonville, FL and Darlene Gero (Kevin) of Altona, NY, and sister, Luella Rabideau of Keeseville, NY. Charlie is also survived by several nieces and nephews as well as his special friend Grace Rascoe.
Charlie was predeceased by his wife, Roberta Manley Smith, daughter, Karen Smith, brothers, George Smith, Warren Smith, and sister, Emily Jaques.
Relatives and friends are invited to call Tuesday, September 28, 2021, from 4-6 p.m. at the Heald Funeral Home, 48 Court Street, Plattsburgh, NY. A graveside service will be held on Wednesday, September 29, 2021 at 11:00 a.m. at Norton Cemetery, Keene, NY.
Memorial donations may be made to Hospice of the North Country or North Country Honor Flight.
To light a memorial candle or leave an online condolence please visit www.healdfuneralhomeinc.com
Published by Legacy on Sep. 22, 2021.
Legacy.com reports daily on death announcements in local communities nationwide. Visit our funeral home directory for more local information, or see our FAQ page for help with finding obituaries and sending sympathy.
To plant trees in memory, please visit the Sympathy Store.
MEMORIAL EVENTS
Sep
29
Graveside service
11:00a.m.
Norton Cemetery
Keene, NY 12942
Funeral services provided by:
Heald Funeral Home, Inc. - Plattsburgh
MEMORIES & CONDOLENCES
1 Entry
Charlie was one of the nicest people I've met here in the North Country. I met him at 260 Lake Street and he had many wonderful stories. He always had a smile on his face and was a true inspiration. Wonderful person.
Dennis Hardin
Work
September 25, 2021
Showing 1 - 1 of 1 results