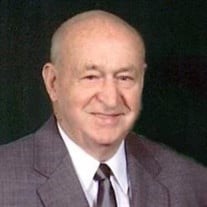 He was a member of First Baptist Church in McPherson, Darold was Baptized on April 2, 1961 by Reverend Victor Trower.

He served in the U.S. Navy as a Electrician Mate 3rd Class on the U.S.S. Frank E. Evans and he received the Good Conduct Medal..

Through the years Darold worked for Graves Drug Store, Moody's Apco, Kansas Cylinder Head, Swick Guth, Sterling Drug, and retired after 20 years of service from the maintenance department of Sanofi.

Darold was a member of the Veterans of Foreign Wars Post 2715, McPherson, Kansas. He enjoyed working in his workshop tinkering and loved his cats and loved spending time with his grandchildren.

Darold Eugene Bradford was united in marriage to Carol Lee Bever on April 22, 1961 at McPherson, Kansas where they established their first home together. This union was blessed with the birth of a daughter and a son, Debra and Kevin.

Darold was preceded in death by his parents and his wife, Carol.

A graveside service will be held on July 8, 2021 at 11 a.m. at the McPherson Cemetery, McPherson, Kansas, with Reverend John Pattison officiating.