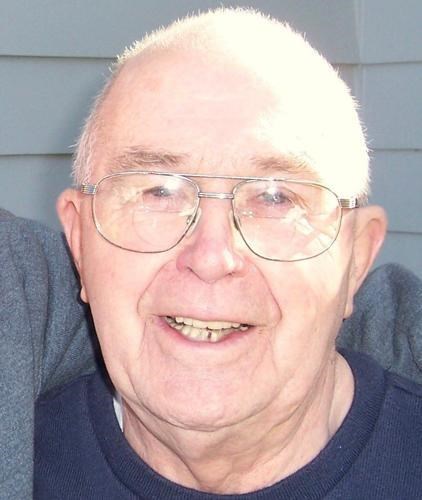 FUNERAL HOME
Allen Memorial Home - Endicott
511-513 East Main Street
Endicott, NY
Darrell Stone (aged 95) of Endicott, NY, passed away in his sleep at his home of over 65 years on 14 November 2021.
Predeceased by his wife of 57 years, Caroline (Casort) Stone, and his identical twin brother, Earl Stone, he is survived by his daughter, Mary Jane Stone-Bush and husband Wayne Bush (Philadelphia), his son David Stone and wife Donna June of Endicott, and niece Janet Stone McGuigan. Darrell was proud of his four grandchildren: Christopher Stone-Bush and wife Tomoko Onishi of Osaka, Japan; Sara Stone-Bush and wife Alex Lauze of Collingdale, PA; Stephen Stone-Bush of Philadelphia; and Jillian Stone and partner Tim Wentworth of Prospect (Medford), OR. And even more proud to have three great-granddaughters: Maya Oneshi Stone-Bush, Rain Lauze Stone-Bush and Remi Stone-Wentworth.
Darrell, raised with his twin, Earl, in East Homer, NY, was a professional civil engineer. He and his brother served in the Navy at the end of WWII, and then, after graduating from Clarkson College, Darrell went on to serve in the Army Corps of Engineers, with which he and wife Caroline (a Kansas native) lived near Nancy, France after their marriage. Coming to Endicott in the mid-1950's to work for Endicott-Johnson Corp., he spent the rest of his long and successful career with the Broome Country DPW, ending his service as a Deputy Commissioner.
After retirement, which included working as a licensed land surveyor, and eventually as an Assistant Stage Manager at the Anderson Center with now Binghamton University, Darrell and Caroline enjoyed square and round dancing, as well as trips to Italy, Spain and Ireland. He once said, if he knew how busy retirement was, he would have continued working.
He was a member of St. Paul's Episcopal Church, Endicott, where Caroline served as organist for over 35 years, and was involved with their vestry and other committees throughout his life.
A memorial service for family and friends is scheduled for 11:00 am, Saturday, December 4th, at St Paul's, 200 Jefferson Ave, Endicott (calling hours at the church from 10 to 11 am), with private graveside services at a later date.
In lieu of flowers, friends are encouraged to donate in Darrell's name to their favorite service-oriented charity.
Published by Allen Memorial Home - Endicott on Nov. 20, 2021.
To plant trees in memory, please visit the Sympathy Store.
MEMORIAL EVENTS
To offer your sympathy during this difficult time, you can now have memorial trees planted in a National Forest in memory of your loved one.
Funeral services provided by:
Allen Memorial Home - Endicott
MEMORIES & CONDOLENCES
0 Entries
Be the first to post a memory or condolences.