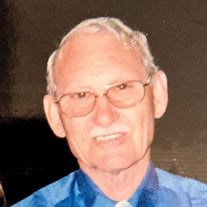 A graveside service will be held at 1 p.m. on Thursday, April 15, 2021 at Unity Cemetery, with the Rev. Tony Caruso officiating. Following the service, the family will receive friends at the gravesite.

Born in Marvin, N.C., Gene was a son of the late David Lee Morris and Lessie Braswell Morris. He proudly served in the U.S. Army. Gene was a retired machinist who had worked for Armstrong Flooring in Pineville and Highland Park in Charlotte. He enjoyed gardening, woodworking, restoring furniture and upholstering. His greatest enjoyment was restoring his 1955 Chevy car and his 1955 Chevy truck.

Memorials may be made to Alzheimer's Association, SC Chapter, 3223 Sunset Blvd., West Columbia, SC 29169.
Send sympathy flowers to the funeral home, or plant memorial trees in a national forest.
Published by Wolfe Funeral Home - Fort Mill on Apr. 15, 2021.
MEMORIAL EVENTS
No memorial events are currently scheduled.
To offer your sympathy during this difficult time, you can now have memorial trees planted in a National Forest in memory of your loved one.
Funeral services provided by:
Wolfe Funeral Home - Fort Mill
MAKE A DONATION
Please consider a donation as requested by the family.
MEMORIES & CONDOLENCES
0 Entries
Be the first to post a memory or condolences.