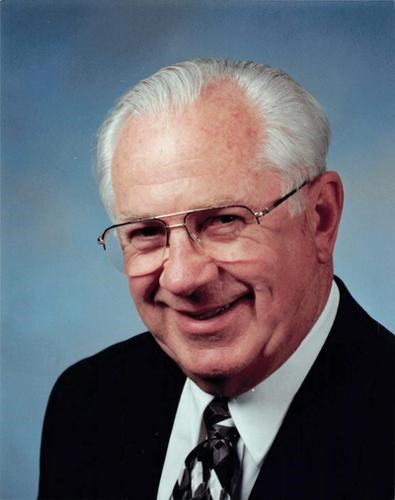 FUNERAL HOME
Eastgate Funeral & Cremation Service - Bismarck
2302 East Divide Avenue
Bismarck, ND
Dennis Meyer, 87, Mandan, passed away Sept. 15, 2021, into the loving arms of his Heavenly Father. He will be remembered for his great mind, insatiable work ethic and his love of family. His idea of heaven would be one continuous pinochle tournament, so we are sure he's pulled up to a table right now.
Funeral services will be held 10 a.m. Tuesday, Sept. 21 at First Lutheran Church, 408 Ninth St. NW, Mandan.
Visitation will be held from 5 to 7 p.m. Monday at Parkway Funeral Service, 2330 Tyler Pkwy, Bismarck. A prayer service will be held at 7 p.m.
Burial will be held at Baldwin Cemetery, Baldwin.
Dennis was born September 26, 1933, in Wilton to Herman and Florence Meyer. Dennis grew up on the family farm near Baldwin. He and his cousin, next door neighbor and lifelong friend, Dale Coleman, worked their family farms together, driving tractor by age 12. The two boys were allowed to share one beer at the end of a long day.
Even as a youth, Dennis was driven. He organized and served as the first president of the ND Young Farm Bureau Farmers and Ranchers and won the Engineering division of the Little International Competition with his irrigation model.
After attending a one-room rural schoolhouse through eighth grade, he graduated from Bismarck High School in 1951. He farmed with his family for several years but wanted to be an engineer – a decision that was met with great disapproval from his parents. After two years at Bismarck Junior College, he completed his degree at North Dakota State University in 1961 and was employed throughout his career at the USDA Soil Conservation Services in Fargo, Forman, Minot and Bismarck until retiring in 1989. He still owned the family farm in Baldwin and remained active in the decision making until his death.
Dennis was proud to be a professional engineer and rose through the ranks to become president of the National Council of Examiners for Engineering and Surveying (NCEES), the organization that oversees licensure for those professions. The position allowed him to travel nationally and internationally representing them. He was proud to attend the 2019 NCEES Annual Meeting in Washington D.C. and was the oldest living president in attendance.
After retirement, he formed Dennis F. Meyer, Inc. and was an engineering consultant to many important projects that included designing a school for the God's Child Project in Guatemala, part-owner of Terra Vallee Land Development, Inc., and getting several patents including a trolling plate for fishing boats, various attachments for irrigation systems and a liquid monitor for dysphagia patients. He was president of the Bismarck State College Alumni Association and started the Outstanding Alumni Award under his leadership. He was honored with the award in 1985.
An avid volunteer, he was also passionate about the local SCORE (Senior Corp of Retirement Executives) chapter, working with many entrepreneurs to develop their business plans. Dennis served as president of the local group and also as the executive director of North Dakota SCORE. He served on Lutheran church councils in Forman, Minot, Bismarck and Mandan.
Dennis was a proud Rotarian and every year enjoyed working at and handing out awards at the Rotary Wrestling Tournament and designing a new themed gavel for the incoming president.
He enjoyed family traditions like taking his grandchildren to the Shrine Circus when they were young and making strudel with the family. Even in his last days, people, including the hospital staff, remarked what a kind and caring man he was.
Dennis and Bernice Clark married and joined their families in 1995.
He was preceded in death by his parents, Herman and Florence; sister, Shirley Rath; and grandson, Steven Dockter.
Missing him greatly are his wife, Bernie; daughters, Kora (Ken) Dockter and Janel (Mike) Schmitz; stepsons, Dan (Karla) Clark and Jay (Michelle) Clark; grandchildren, Shanna (Brandon), Brady, Kayla (Ryan) Albin, Jason Schmitz and David (Kate) Schmitz; three step-grandchildren, Josh Clark, Jack Clark and Gabe Clark; and nine great-grandchildren.
In lieu of flowers, the family prefers memorials to the BSC Dennis F. Meyer Scholarship Fund, the North Dakota Suicide Prevention Coalition or the First Lutheran Church in Mandan.

To plant Memorial Trees in memory of , please click here to visit our Sympathy Store.
Published by Legacy on Sep. 17, 2021.
Legacy.com reports daily on death announcements in local communities nationwide. Visit our funeral home directory for more local information, or see our FAQ page for help with finding obituaries and sending sympathy.
To plant trees in memory, please visit the Sympathy Store.
MEMORIAL EVENTS
To offer your sympathy during this difficult time, you can now have memorial trees planted in a National Forest in memory of your loved one.
Funeral services provided by:
Eastgate Funeral & Cremation Service - Bismarck
MEMORIES & CONDOLENCES
0 Entries
Be the first to post a memory or condolences.