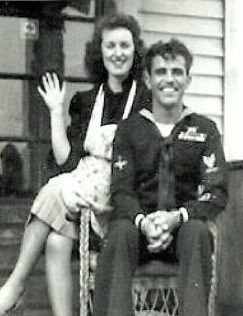 Jean Camilla (Dewey) Banks died on April 6, 2020.  Her husband, Donald Austin Banks, preceded her in death by 3 months.  Both died of complications of old age.  They had been married for 75 years.  Jean was 95 and Don was 96.

Jean was born on April 1, 1925 in Buffalo.  Her parents were Elmer Dewey and Nora (Lillis) Dewey.  Jean was the second of four children.  When Jean was young, the family moved to a house her Father built on Roseview Avenue in Blasdell.  She attended grammar school at Our Lady of the Sacred Heart on Abbott Road – where she frequently walked the more than two miles to and from school.  For high school, Jean attended Our Lady of Victory in Lackawanna.  While at OLV she was an excellent student and sang in the choir.  She particularly enjoyed performing during Mass at the Basilica.  She graduated in 1942 when she was seventeen.  Almost immediately she went to work as a secretary for the Army Corps of Engineers in Buffalo – where she worked throughout World War II.

Don was born on April 23, 1923 in Buffalo to John Banks and Beatrice (Greer) Banks.  He also was the second of four children.  When Don was a young boy, his parents divorced.  Don and his siblings were raised by their Mother who often worked two and three jobs at a time to support the family.  Don enjoyed telling stories about how poor they were in those days.  One of his favorites involved receiving only one present for Christmas – a pair of skis, that he promptly broke the first time he used them!  After attending a number of elementary schools in the Buffalo area, Don graduated from South Park High School in June 1941 and went to work for Curtiss-Wright helping to make military aircraft.  At the start of World War II, Don enlisted in the Navy.  He volunteered for flight duty and served as a torpedo bomber turret gunner in the Pacific.  Don and his squadron served on three different aircraft carriers, earned three battle stars and took part in two invasions.  His squadron was one of only a few awarded a Presidential Unit Citation.

In early 1944, Jean's and Don's lives changed dramatically.  One evening, Don became bored while standing watch aboard his ship in the South Pacific.  He decided to write a letter to a girl who used to live next door to him in South Buffalo – but whom he had not seen in several years.  Jean was that girl.  The two began corresponding regularly and when Don returned to Buffalo on leave in November 1944, they went on a date.  After a few more dates, they decided to get married – which they did in the OLV rectory on December 14, 1944.  Shortly after the wedding, Don went back to the war and Jean went back to work at the Corps of Engineers.  She was nineteen.  He was twenty-one.  Don was eventually transferred to Miami, Florida for additional training and in March, 1945, Jean was able to join him for a weeklong belated honeymoon.

After the war, the young couple moved in with the Jean's family in Blasdell.  In December 1945, Jean gave birth to their son, Stephen.  When Jean's Mother died unexpectedly in March 1946, Jean at age twenty suddenly became the family matriarch – keeping house and taking care of her baby son, her husband, her father, her two younger sisters and her older brother.  She did this for four years.  In the meantime, Don took advantage of the G.I. Bill and enrolled at Buffalo State College majoring in Art Education.  He graduated in January 1950 and began a teaching career in Niagara Falls.  In 1953, Don used the G.I. Bill again to buy a small house in Kenmore.  They would live in that house for more than 65 years.

After getting settled in their new home, Jean enrolled at Buffalo State to pursue a teaching degree.  However, after a couple of weeks of classes and a close look at the family's financial situation, she decided that she needed to go back to work.  She never complained about giving up the chance to further her education.  Over the years, Jean worked at several secretarial jobs in the Buffalo area but her longest and favorite was as secretary to the head of the math department at Buffalo State.  It was the position from which she retired in the early 1980s.  She did love working in the math department and frequently recounted her most amusing experience  – the time in the early 1970s when she looked out the window and saw a group of "streakers" running across the campus!

In addition to her work at Buffalo State, Jean enjoyed being a Cub Scout Den Mother; serving as an elected Delegate for George McGovern in 1972; driving her favorite car a 1970s Dodge Charger; traveling – her favorite trip was one to her ancestral home in County Clare, Ireland; and being a longtime member of Saint Paul's Catholic Church in Kenmore.  She also enjoyed bowling, reading and playing cards.  She played a mean game of Canasta.  Jean also liked to dance.  She enjoyed telling how in her younger days she won a dance competition at a Buffalo nightclub.  In later life she got great pleasure from her four grandchildren and six greatgrandchildren.  Jean was intensely proud of her Irish heritage.  She was a strong woman whose Irish eyes were almost always smiling - even in later life as she suffered with almost constant and severe arm tremors and dementia.  She can best be described and remembered as a generous, self-sacrificing and loving person whose life was full of acts of Christian charity.  It was a life well lived.

Don - after having moved into their Kenmore home, earned a Master's Degree from Buffalo State in the mid-1950s.  After several years of teaching art and loving it, he was selected to be the Supervisor of Art Education for Niagara Falls.  He ultimately retired as the Supervisor of both Art and Music Education.  Prior to retiring, he researched and wrote a book: "The Primitive Art of Africa."  In addition to his day job working with young people, Don spent many an evening and weekend working with boys as a Boy Scout leader.  He led his Scouts on some great adventures – including backpacking up Mount Marcy, New York's highest peak, in three feet of snow!

After he retired, Don challenged himself by engaging in several various hobbies including: running - he finished the Boston Marathon in under four hours at age 55; car building – he built a classic Bugatti sports car and sold it; and photography – he took many photos of his grandchildren and developed them himself.  And he loved and enjoyed spending time with those grandchildren and greatgrandchildren.  The last few years of Don's life were spent serving as Jean's caregiver.  It was a role that he never expected, but willingly undertook until they both moved into the Skilled Nursing Facility at Elderwood at Cheektowaga.  Don was a man who started with little but discovered and developed his talents early and used them to help countless others – especially young people.  His was also a life well lived.

In addition to Don, Jean was preceded in death by her Mother, Nora; her Father, Elmer; her older brother, Daniel; and her two younger sisters, Frances Mowell, and Ann Kruszka.

Don was preceded in death by his Mother, Beatrice; his Father, John; his older brother, John; and his younger brother, David.  He is survived by his sister, Joyce Argyle.

The family greatly appreciates the wonderful care and love given to Jean and Don during the last two years of their lives by the staff at Elderwood at Cheektowaga.  Thank you!

The family will receive those wishing to pay their respects at the D. LAWRENCE GINNANE FUNERAL HOME 3215 Delaware Avenue, Kenmore, Friday (July 23rd) 3:00 to 7:00 PM.  A Mass of Christian Burial will be celebrated at Our Lady of Victory Basilica 767 Ridge Rd., Lackawanna, NY Saturday at 9:15 AM with burial to follow immediately at Holy Cross Cemetery on South Park Avenue.

In lieu of flowers, the family requests that donations be made to Our Lady of Victory Homes of Charity, 767 Ridge Road, Lackawanna, New York 14218