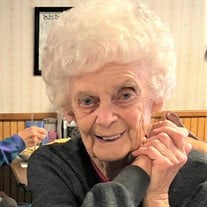 ABOUT
Carlisle High School
FUNERAL HOME
Kreamer Funeral Home & Crematory, Inc. - Annville
618 E. Main Street
Annville, PA
Doris M. West, 97, formerly of Jonestown, passed away surrounded by her loving daughters on Sunday, November 28, 2021, in Myerstown.
She was born in Plainfield, Cumberland County, PA on April 17, 1924, to the late Robert W. and Margaret E. A. Goodhart Hippensteel, along with her twin sister Dorothy. The twins were tiny. The doctor warned their parents that they shouldn't bother to name the babies, because he didn't expect them to live. Despite the doctor's dire predictions and a bout of scarlet fever, the babies thrived as they grew up on the family's farm.
The sisters were inseparable throughout their school years, sharing an uncanny bond that only twins can truly understand. Even after they were geographically separated in later years, that treasured bond remained intact. Their instinct for understanding what the other was feeling was uncanny to the rest of their family. She was proud of being a twin, but said she didn't really understand why people made a big deal about it.
After graduating from Carlisle High School in 1941, Doris continued her education at Central Pennsylvania Business School. Recruited for a job working with the FBI in Harrisburg, she instead chose to work at nearby Carlisle Barracks.
When the family resettled in Indiantown Gap in 1942, she began a career as an administrative clerk at the military post with the Post Engineers. She received many awards and commendations in recognition of her professional skills throughout the years. She completed 35 years of federal service as of her retirement in September 1983.
Doris was a talented sketch artist who worked with pastels and oil paints. Later, after moving to Jonestown, she delved into ceramics and operated a ceramic shop in her basement for several years in the 1960's.
Her post-retirement years provided her more time to spend with her parents who lived next door and to pursue her interest in genealogy.
Doris credited her appreciation for history to a country schoolteacher who impressed the importance of honoring the past. In her later years she proudly traced her family roots back to Scotland and uncovered direct family ties to the Hume clan.
She shared her genealogical detective skills by volunteering at the Lebanon County Historical Society with her friend the late Margaret Gerberich.
She enjoyed reading several books a week and collecting antique dolls. She excelled at trivia games, particularly questions concerning gardening, birds, and classic movies and movie stars. Her favorite musical entertainer of all time was Nelson Eddy.
Doris had a green thumb and, when she was able, lovingly maintained a large, beautiful garden. She had a soft spot for the birds and squirrels who frequented her backyard, and she made sure that they always had clean water and plenty to eat.
The neighborhood cats also knew that this was the place to go for some loving pets and plenty to eat. For most of her life Doris had at least one cat as a household companion, and she could name them all up to the end.
She enjoyed spending time with her twin at her Cumberland County farm, and the birthday get-together with the family was the most anticipated event of the year.
In addition to her twin sister Dorothy Mohler of Newville, she is survived by daughters Diane (Lynn) Wenger, Schaefferstown and Barbara West, Cleona; grandchildren Ethan (Sally) Wenger, Seth Wenger, Laura, Jason, and Christy; great grandchildren Trinity Seaman, Meredith Batz, Ella Wenger, Alex Occhiena, and Collin Batz.
She was preceded in death by her sister Margaret Joanne "Peggy" Stancer and brother Robert G. Hippensteel.
A memorial service to celebrate her life will be held on Saturday, December 11th at 11:00 a.m. at the Diller Mennonite Church, 345 Creek Rd., Newville. A visitation will be held starting at 10:30 a.m. until the start of the service.
Contributions to honor her memory may be made to Steelton Community Cats (a TNR program), 1 N. Front St., Steelton, PA 17113 or the Lebanon County Historical Society, 924 Cumberland St., Lebanon, PA 17042.
Published by Kreamer Funeral Home & Crematory, Inc. - Annville on Nov. 29, 2021.
To plant trees in memory, please visit the Sympathy Store.
MEMORIAL EVENTS
Dec
11
Visitation
10:30a.m. - 11:00a.m.
345 Creek Road, Newville, PA
Dec
11
Memorial service
11:00a.m. - 11:30a.m.
345 Creek Road, Newville, PA
Funeral services provided by:
Kreamer Funeral Home & Crematory, Inc. - Annville
MEMORIES & CONDOLENCES
1 Entry
Offering our deepest condolences during this difficult time.
The Staff of Kreamer Funeral Home
November 29, 2021
Showing 1 - 1 of 1 results