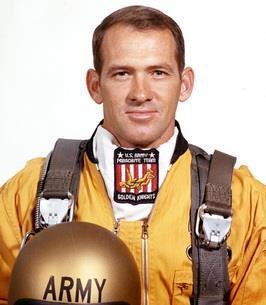 A Celebration of Life will be held at 4:00 pm on Saturday, June 26, 2021, at Lake Forest Church in Huntersville, NC, officiated by Rev. Dr. Mike Moses, with full military honors by the U.S. Army Honor Guard. The family will greet friends following the service.

Fred was born on March 22, 1939, in St. Petersburg, FL to the late Elizabeth Mary Louise Haines O'Donnell and Clyde W. O'Donnell, Sr. He was also preceded in death by his brother, Danny O'Donnell.

Fred lived a life dedicated to the service of others. He had a distinguished 30-year career with the U.S. Army serving as part of the Armed Forces Expeditionary Forces (Korea) and the Vietnam War. He served multiple tours of duty with the 82nd Airborne Division. He was also a member of U.S. Special Forces, serving in the 1st, 5th and 7th Special Forces (Green Berets). He was a First Sergeant in the 82nd Airborne Division and a Sergeant Major. He served with the U.S. Army Parachute Team, the Golden Knights, as both a demonstrator and competitor eventually leading the Relative Work Competition Team to win their first World Championship in 1977. During his military career, he received significant recognition including the Legion of Merit Medal, Bronze Star Medal and many others. He finished his career as the Reserve Officers Training Corps (ROTC) Sergeant Major at Marshall University. While performing his duties as Sergeant Major, as well as instructor for the detachment, he went on to complete his college education.

After retiring from the Army, Fred joined the Army Recruiters for a short time before working full time for another 15 years with the FAA, finishing his career as the Western-Pacific Region Public Affairs Officer.

In retirement, Fred was always trying to help others. He and Ronda traveled the country with FMCA doing builds for Habitat for Humanity. After many years, they left the road and settled in Florida where Fred continued serving others by helping to build and install handicap ramps for those in need. Once his health began to fail and he could no longer build, he continued to serve others by volunteering at Cooperative Christian Ministries (CCM) food bank, along with Ronda, picking up donated food at local grocery stores each week. Fred remained true to form in his call to serve others the remainder of his life by working with other charitable organizations and serving his children and grandchildren in every way possible.