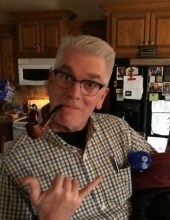 FUNERAL HOME
Barnes Friederich Funeral Home
1820 S Douglas Blvd
Midwest City, OK
On Sunday, October 10th, 2021, Gary Damian Swymeler, loving husband and proud father of three sons, passed away at age 55.
Gary was born on March 7th, 1966 in Saint Joseph, Missouri to Gary and Mary (Barsch) Swymeler. Gary had a servant's heart. He dedicated his life to service through all his years in Military and Law Enforcement positions. Gary joined the United States Air Force in 1986. After a few years Active Duty, he transferred to the Oklahoma Air National Guard, for the remainder of his Military career, where his Primary Specialty was Operations Intelligence Superintendent with the 137th OSF. He also served as First Sergeant of the 137th AES. Gary received many awards and medals over his military career and served time overseas, for various assignments, with the last deployment being Operation Enduring/Iraqi Freedom from December 19th, 2001 to December 30th, 2002. Gary retired from Military service on October 30th, 2006 with the rank of SMSgt/E8. A good portion of his time in the Military was spent in the Oklahoma Counterdrug Program, where he met the love of his life, Terri.
Gary and Terri were married December 14th, 1996 in Eureka Springs, Arkansas. Gary and Terri raised three sons, Isaac, Benjamin, and Gabriel.
In addition to his stellar Military career, Gary had a Law Enforcement career, spanning 22 years, equally stellar. Gary always performed his Law Enforcement duties ethically, morally and without prejudice. He began his Law Enforcement career July 1997, as a Patrolman with the City of Choctaw. From there, he served Major County, as a Deputy, in Northwest Oklahoma, and then ended his career as Chief of Police for the City of Fairview in July 2019. For the past two years Gary has worked for Sentry Electrical Group as a Safety Advisor.
In addition to his servant's heart, Gary had an artistic side. He could build just about anything, could paint beautifully and loved putting puzzles together. He adored anything that had to do with his boys and he had a passion for all things that had to do with space; he secretly really wanted to be an Astronaut.
Gary is survived by his wife Terri, his three sons, Isaac, Benjamin and wife, Molly, and Gabriel. His Father and Mother, Gary and Mary, his three sisters, Gracie Lemons and husband Chris, Liz Charalampous and husband Phillip, Scarlett Williams and husband Kevin and many nieces, nephews, as well as great nieces and nephews. A funeral service will be held on Saturday, October 16th, 2021 at Choctaw church of Christ, Choctaw, OK, with burial following at Memory Lane Cemetery, Harrah, OK.
To send flowers to the family or plant a tree in memory of Gary Damian Swymeler please visit our Tribute Store.
Published by Barnes Friederich Funeral Home on Oct. 12, 2021.
To plant trees in memory, please visit the Sympathy Store.
MEMORIAL EVENTS
Oct
15
Visitation
12:00p.m. - 8:00p.m.
Barnes Friederich Funeral Home
1820 S. Douglas Blvd., Midwest City
Oct
15
Prayer Service
5:00p.m.
Barnes Friederich Funeral Home
1820 S. Douglas Blvd., Midwest City
Oct
16
Funeral service
1:00p.m.
Choctaw Church of Christ
14998 E Reno Ave, Choctaw
Funeral services provided by:
Barnes Friederich Funeral Home
MEMORIES & CONDOLENCES
0 Entries
Be the first to post a memory or condolences.