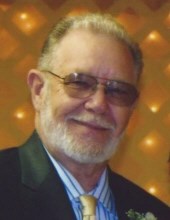 FUNERAL HOME
Barnes Friederich Funeral Home
1820 S Douglas Blvd
Midwest City, OK
Gerald Thomas Plunk, 84, passed away on October 9th, 2021, and joined our Lord in heaven. Dad was many things to many people, but he was at best a loving father and husband. Mom and Dad were happily married for 59 years until her death in 2016. Gerald was an avid sportsman and accomplished athlete receiving several scholarships to play college baseball and football. Gerald grew up during rough times during the war and learned about life the hard way as a nation was building a generation known as the best. Gerald instilled his sense of honesty and hard work ethic into his family and his everyday life. The best thing that he did was spend time with his family. Many, many family vacations spent camping out during the summers, teaching his children how to water ski, build campfires, roast marshmallows, and catch an occasional fish.
Gerald spent countless hours being involved in the families' sporting events, everything from coaching Little League teams to working the night shift so he could be at our practices. He taught us many lessons, many which we still use today. We will forever cherish the wonderful memories of our time with Dad. Gerald loved the outdoors and liked nothing more than being outside around nature. He grew up outside in the outdoors he loved. He taught himself how to hunt and fish and taught himself all he could about the natural world. He kept that love of nature and the outdoors throughout his life. He loved nothing more than watching turkeys, deer, and squirrels from his back porch.
Gerald started working for the Rock Island railroad in 1957 and worked there until his retirement in 1998. Gerald held many positions with the railroads from switchman to train engineer. Gerald always made sure to give his children and grandchildren up close tours of the large freight trains he helped to operate.
Gerald was preceded in death by his wife Jo Ann (Coyer) Plunk, his mother and father Jess and Bonnie (Smith) Plunk, brothers Merle and Roy Plunk, and Raymond Glover. He is survived by his daughter, Kelly Anderson, son Craig Plunk and wife Trudi, grandchildren Ashlee, Jessica, Sara Jo, Sarah Eileen, Paige Garrett and Kayli, great grandchildren as well as many nieces, nephews, cousins, and friends. To send flowers to the family or plant a tree in memory of Gerald Thomas Plunk please visit our Tribute Store.
Published by Barnes Friederich Funeral Home on Oct. 12, 2021.
To plant trees in memory, please visit the Sympathy Store.
MEMORIAL EVENTS
Oct
12
Funeral service
1:00p.m.
Barnes Friederich Funeral Home Chapel
1820 S Douglas Blvd, Midwest City
Funeral services provided by:
Barnes Friederich Funeral Home
MEMORIES & CONDOLENCES
0 Entries
Be the first to post a memory or condolences.