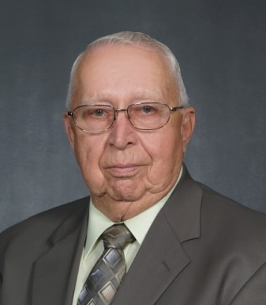 FUNERAL HOME
Vondel Smith Mortuary South Lakes
4000 SW 119th St
Oklahoma City, OK
Friends and family are invited to attend a celebration of his life on Friday, October 15 at 11:00 am at the Vondel Smith Mortuary Chapel located at SW 119th and I-44. Viewing will be Friday from 9:00 am to 11:00 am before the celebration.
Glen E. Butler, age 91, entered the gates of heaven on Monday, October 11, 2021. Glen was born on June 25, 1930 in Earlsboro, OK to John Harvey Butler and Hazel McCrain Butler. After graduating from Prairie Valley HS, Glen went to work for Southwestern Bell Telephone Company where he worked for 43 years. Starting as a lineman, Glen ended his career with SWBT as a Manager of Network Services. After his retirement with SWBT, Glen began working for Moore Norman Technology Center where he was an adjunct assisting student's in the testing center. He worked at MNTC until 2019 where, at age 89, he retired after 30 years.
While in high school, Glen met the love of his life, Reba Jeanne Hamon. They were married on October 14, 1949 and together had three children. They moved to the Moore area in 1961, where Glen and his family joined First Baptist Church of Moore. Glen served his church as Deacon, educational director, and member of several committees including leading the widows ministry. He was also active in his community as a past member of the south Oklahoma City Lion's Club, the Moore Rotary club, and a Moore Chamber Ambassador for many years. Glen loved the Lord, his family, camping in the mountains of Colorado, and listening to Christian gospel singing.
Glen is survived by his children, Dr. Jim Butler and wife Lawanda, Randy Butler and his wife Cheryl, and Dr. Karla Marshall; his grandchildren Meredith, Ashley, Lauren, Brian, Michael, Tony, and Cesley; and 20 great-grandchildren. He is preceded in death by his parents, his wife of 63 years, his sister Jane Irene Rutherford, and brother Marion Butler.
The family would like to thank the staff at The Village on the Park where Glen enjoyed being a resident and to the Norman Regional Hospital caregivers who provided great care for Glen in his last days.
Published by Vondel Smith Mortuary South Lakes on Oct. 12, 2021.
To plant trees in memory, please visit the Sympathy Store.
MEMORIAL EVENTS
Oct
15
Visitation
9:00a.m.
Vondel Smith Mortuary at South Lakes
4000 SW 119th Street, OKLAHOMA CITY, OK
Oct
15
Celebration of Life
11:00a.m.
South Lakes Chapel
4000 S.W. 119th, OKLAHOMA CITY, OK
Funeral services provided by:
Vondel Smith Mortuary South Lakes
MEMORIES & CONDOLENCES
1 Entry
MY HEART GOES OUT TO YOU THREE CHILDREN AND FAMILIES. MAJOR AND I THOUGHT THE WOLRD OF YOUR DAD. MAJOR WOULD HAVE BEEN SO SAD.
LOVETA MORROW
October 13, 2021
Showing 1 - 1 of 1 results