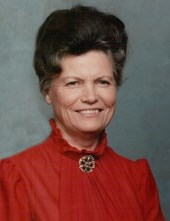 FUNERAL HOME
Barnes Friederich Funeral Home
1820 S Douglas Blvd
Midwest City, OK
Hazel Laverne (Wilkinson) Cline passed from this life on October 12, 2021 in Harrah, Oklahoma.
Laverne was born on August 29, 1931 to Herman and Olive (Watters) Wilkinson. Sister Alice Stoutt helped deliver her In Henryetta, Oklahoma. LaVerne was the oldest of five sibling who were all raised primarily in Heber Springs, Arkansas.
She was baptized into the General Assembly and Church of the Firstborn by her Uncle Dewel Wilkinson. LaVerne eloped with Jorden "Jay" P. Cline to be married Hernando, Mississippi and they were blessed with four children: Johnny Jorden Cline, Donnie Ray Cline, Hazel Darlene Cline and Michael Dewayne Cline. They moved to Rio Linda, California to raise their family in a modest home. LaVerne was a devoted wife and mother. She persevered by always attending church and keeping her home. In her pastime, she learned to decorate cakes and became good at it. She looked forward to spending time with her family. She spoke about when her mother would come visit and watching her mother effortlessly climb the fig tree in the yard so that they could bake some yummy treats together. She and her family made many memories going on vacation and to the beach with her siblings and their families.
After the children were grown, she and Jay would travel with their dogs in tow to visit family and to take care of her mother in Heber Springs.
When she was alone in her later years, she and her sister, Velma, spent a lot of time together canning preserves and shopping for clothing sales. She also began working for Brashers Car Auction driving cars. Over the phone, she often made mention about the latest luxury car on the market that she drove at work that week (ie the Lamborghini with the crazy doors). She enjoyed being needed and the company relied on her as she was very dependable and efficient.
Over the years, she spoke many times about moving to Oklahoma to be near more family but was reluctant to leave her longtime home and church family. In 2013, she made that difficult move. God made a way for her to be reunited in the same household with her two oldest boys. She was often found in Donnie's room stroking his head as he slept during his last days on this earth.
LaVerne loved her family and the Lord.
She was proceeded in death by her parents; Jorden P. Cline, Donnie R. Cline and wife, Kimberly Cline; infant daughter, Hazel Darlene Cline; siblings: Charles Wilkinson, Glen and wife, Zeola Wilkinson, Velma and husband, Johnny Smith; granddaughter Teresa Munyon; great-grandson: Taylor Chambers and great-granddaughters: Emma Chambers and Madelynn Cline
She is survived by her sons: Johnny Cline and Michael Cline; her daughters-in-law: Carol Cline and Patty Cline; her brother Troy and wife, Marilyn Wilkinson; seven grandchildren and their spouses; 15 great-grandchildren and a host of beloved nieces, nephews and cousins
To send flowers to the family or plant a tree in memory of Hazel LaVerne Cline please visit our Tribute Store.
Published by Barnes Friederich Funeral Home on Oct. 14, 2021.
To plant trees in memory, please visit the Sympathy Store.
MEMORIAL EVENTS
Oct
15
Funeral service
2:30p.m.
General Assembly and the Church of the First Born
11312 Kirkwin Lane, Choctaw
Funeral services provided by:
Barnes Friederich Funeral Home
MEMORIES & CONDOLENCES
0 Entries
Be the first to post a memory or condolences.