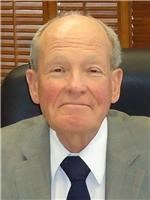 After his mission, Miff completed his undergraduate and law degrees at the University of Utah. During his time in law school he met the love of his life, Susan Lee Clyde. They were married in the Salt Lake Temple on April 10, 1969 and they recently celebrated their 51st wedding anniversary. After Miff graduated from law school, he worked as Davis County chief criminal deputy attorney. Later, he established a private practice where he enjoyed counseling family, friends, and associates.

Miff had a tremendous love for Jesus Christ. A member of the Church of Jesus Christ of Latter-day Saints, he served faithfully in many callings including bishop, bishopric counselor, and ward executive secretary. As a high councilor, he served as a chairman of Bountiful's Handcart Days, which he enjoyed celebrating with his family. He was a valiant home teacher and ministering brother, and enjoyed serving in the Bountiful Temple with his wife. Fifty years after his first mission, Miff returned to Germany with Susan to serve in the Berlin Mission office. They enjoyed working together and became dear friends with the missionaries and local saints.

Miff was an amazing pianist and loved being a ward organist. His children have fond memories of "Tea for Two" and other duets that Miff and Susan played together. Their home was filled with music and they encouraged their children to develop their own musical abilities. In their golden years, they passed on this legacy to their grandchildren, teaching them piano and hosting delightful recitals which frequently involved costumes and donuts.

Miff loved playing golf with his parents and brother in his early years, and tennis with family at the cabin. He was a University of Utah football and basketball season ticket holder, and enjoyed spending time with his family at the games. His children will always remember playing "Trap-Trap" and "Categories." He and Susan attended many musical and theatrical productions together. They enjoyed traveling, especially to Coronado, CA. He never missed important events in the lives of his family, who were always his highest priority.

Miff was a devoted son and attentive caregiver for his parents in their later years. He was a loyal spouse and loving father whose greatest desire was to serve his wife and raise a righteous posterity. He approached life with optimism and faith, and lived and served wholeheartedly. The family appreciates the many expressions of kindness received at this time.

We know Miff is enjoying a wonderful reunion with his parents and his only sibling, Dr. Roger R. (Linda) Williams, whom he has greatly missed since their passing. He is survived by his loving wife Susan Williams, and his five children: David (Angie) Williams, Julie (Todd) Miller, Jenny (Stephen) Petersen, Matthew Williams, Emily (Shawn) Tate, and sixteen grandchildren.

A celebration of Miff's life will be held Saturday, September 26 at the Bountiful 25th Ward building located at 1500 S 600 E, Bountiful, Utah. A viewing will be held from 9:30-10:30 a.m. and a funeral service at 11:00 a.m. Masks and social distancing are required. Services will also be broadcast via Zoom (see details, below). Funeral Directors Russon Mortuary. Interment in the Bountiful City Cemetery.

Copy and paste this link into your browser at the time of the funeral: