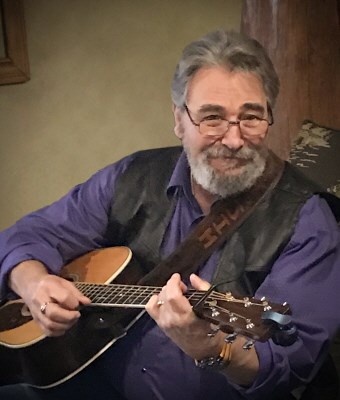 FUNERAL HOME
Goodwine Funeral Homes - Robinson
303 East Main Street
Robinson, IL
James "Jim" Lemmon, 72, of rural Robinson, IL, died August 20, 2021, at Crawford Memorial Hospital in Robinson, IL. He was born April 12, 1949, in Hardinville, IL, the son of William E. Lemmon & Virgie Marie (McDonald) Lemmon-Smith. Jim grew up in rural Crawford County and was a 1967 graduate of Oblong High School. He married Diana Faye McCarty on August 16, 1968, before answering his country's call during the Vietnam War. During his time in the U.S. Army, his bravery and heroism led him to earn the Commendation Medal, the Bronze Star, as well as two Purple Hearts for wounds sustained in battle. Back home, he tended the soil as a farmer for a time while also working in the oil fields. Eventually, he became a self-employed carpenter, that is, when he wasn't acting as an unofficial PR man for his daughter Shandi's landscape business. Their employees affectionately called him "Papa", a term of endearment shared by nearly anyone else who knew him.
Away from work, Jim enjoyed camping with his family, who often found themselves at campgrounds in Flora, Rend Lake, Bean Blossom, IN, among many others. Anyone who knew him could attest to the man's love of music. He played guitar and mandolin at many local hootenannies and bluegrass jams and would often lend his wonderful voice to the music alongside Diana. They also played at Prior Grove Baptist Church, where he was a longtime member. Though he held his membership with a church, it was in the way that he lived his life that bore evidence to the faith that has now been made sight.
We who are left behind are thankful for Jim's life and are humbled by the generosity of spirit that enabled him to take up the call of freedom for his fellow man. His legacy of loving sacrifice lives on in the minds and in the hearts of all who knew him.
He is survived by his wife of 53 years, Diana Lemmon; by his children & their spouses, Shandi Lemmon & Ethan Blankenbeker, Elijah "Abe" & Ava Lemmon, and Bill & Nicole Lemmon; by his grandchildren, Haze & Bryly Lemmon, Kalle Madrid, Ezrah Lemmon, Gracie Lemmon, and Zeke Lemmon; as well as several nieces and nephews.
He was preceded in death by his parents; by his step-father, Darrell Smith; and by his siblings, Denzil Lemmon, Shirley Mendenhall, Barbara Tuel, and LeRoy Huskey.
A time of visitation will be held from 4:00-7:00 p.m. on Tuesday, August 24th, at the Goodwine Funeral Home in Robinson. Funeral services will be held at 10:30 a.m. on Wednesday, August 25th, at the funeral home, with Pastor Zach Manuel officiating. A live stream of Jim's service will be available on Goodwine Funeral Homes' Facebook page or by going to https://www.goodwinefuneralhomes.com/live-stream/live-stream. Burial will be held in the Shire-Prier Cemetery. Memorials may be made to either the "Prior Grove Baptist Church" or the "VFW Transportation Fund", with envelopes available at the funeral home. To send flowers to the family or plant a tree in memory of James "Jim" Lemmon please visit our Tribute Store.
Published by Goodwine Funeral Homes - Robinson on Sep. 21, 2021.
To plant trees in memory, please visit the Sympathy Store.
MEMORIAL EVENTS
Aug
24
Service
4:00p.m. - 7:00p.m.
Goodwine Funeral Home - Robinson
303 E Main St, Robinson, IL
Aug
25
Funeral service
10:30a.m.
Goodwine Funeral Home - Robinson
303 E Main St, Robinson, IL
Funeral services provided by:
Goodwine Funeral Homes - Robinson
MEMORIES & CONDOLENCES
0 Entries
Be the first to post a memory or condolences.