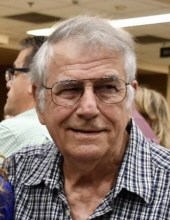 FUNERAL HOME
Williams Dingmann Funeral Homes - Becker
14264 Bank Street
Becker, MN
Memorial Services will be 2:00 p.m. Saturday, December 4, 2021 at Williams Dingmann Family Funeral Home in Becker for James R. Ouellette, 77, who passed away peacefully November 24, 2021 with his wife at his side at St. Cloud VA Community Living Center after a valiant battle with Lewy Body Dementia over the past year. Visitation will be from 12-2 p.m. Saturday, December 4th at the funeral home. Masks and social distancing will be required.
Jim was born on Valentine's Day, 1944 to Josephine (Masloski) and Earl Ouellette. Jim grew up in Nordeast Minneapolis, the middle child of five siblings. The Ouellette kids grew up in a time when children could roam the neighborhood most hours of the day. Jim talked about life in the city where they would go to the movie show and the market, and working on a farm nearby while they were growing up. As a teenager, Jim moved with his parents to the rural Becker area. It was soon after that he met his sweetheart, Linda. Jim was drafted into the US Army in 1965, and subsequently served in Vietnam from 1966-67. He was a truck driver in the Army, often transporting fallen soldiers for identification and preparation to return them home. After honorable discharge, Jim returned to Becker and Jim and Linda were married on June 27, 1969. They made their first home on Eagle Lake, then in 1977 built (literally, themselves) their lifelong home in rural Becker next door to Jim's parents and only a few miles from Linda's parents. It was here that Jim and Linda raised their three daughters, each of which was Daddy's Girl in their own way. Jim was a hard worker, spending most of his working years in a variety of construction jobs, with his final working years spent working on curb and gutter. After retirement, Jim filled his new-found free time with a variety of hobbies which included learning the newest technology, shopping, browsing Craig's List, going to garage sales, and going out for ice cream with Linda. Jim also enjoyed watching the antics of his grandchildren and buying multiples of toys for the house so the kids would never have anything to fight over.
Jim leaves behind wife of 52 years Linda; daughters, Debbie (Keith) Ferdon, Becky (Jason) Otten, and Betsy (Jesse) Given; six grandchildren, Megan, Taylor, Brooke, Avery, Dillon, and Sawyer. He is also survived by his siblings, Pat (Roger) Feyo, Bill (Rosie), Bob, and Peggy (Mike) Weir; as well as many other relatives and friends. Jim was preceded in death by his parents; and In-laws, Norris and Esther Gunderson.
The family extends heartfelt thanks to the amazing caregivers at the BRU unit at the St. Cloud VA for their tireless work caring for Jim in the last months of his illness. He loved his "girls".
Published by Williams Dingmann Funeral Homes - Becker on Nov. 27, 2021.
To plant trees in memory, please visit the Sympathy Store.
MEMORIAL EVENTS
Dec
4
Visitation
12:00p.m. - 2:00p.m.
Williams Dingmann Family Funeral Homes-Becker
14264 Bank St.; PO Box 459, Becker
Dec
4
Memorial service
2:00p.m.
Williams Dingmann Family Funeral Homes-Becker
14264 Bank St.; PO Box 459, Becker
Funeral services provided by:
Williams Dingmann Funeral Homes - Becker
MEMORIES & CONDOLENCES
0 Entries
Be the first to post a memory or condolences.