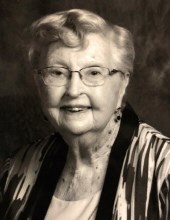 FUNERAL HOME
Fisher Funeral Chapel & Cremation Services - Lafayette
914 Columbia Street
Lafayette, IN
Jean E. Richey, 97, of Lafayette, passed away Friday, October 8, 2021, in her residence at Creasy Springs Health Campus.
Born August 2, 1924, in Lafayette, she was the daughter of the late Ernest and Lula Myrle (Clark) Watkins. Jean was raised in the Battle Ground and had also lived in the Dayton and Mulberry areas. She was a graduate of Dayton High School.
On January 12, 1942, she was married to Rodney Elliott Richey who preceded her in death in 1998.
As a young woman, during WWII, Jean worked with her father at Alcoa. She was retired from Silver-Burdette, a subsidiary of Time Life, where she had worked in the office of the book depository.
When her children were young, the couple moved to the west side of Indianapolis to raise their family. After retiring, they sought warmer winters and fell in love with New Smyrna Beach in Florida, where they lived for many years.
While there, they became members of the First Baptist Church. In 2016, she moved back to her Lafayette roots. Jean attended the First United Methodist Church in West Lafayette. She was a past Worthy Matron of the Hillisburg Chapter of the Order of Eastern Star.
A kind and gentle soul, Jean loved everyone unconditionally. The greatest joy in her life was her family. With her longevity came the blessings of grandchildren and a great-grandchild and she loved them beyond measure.
Surviving are one son, Samuel (Kerri) Richey, Indianapolis; one daughter, Cheryl Emmons, of Noblesville; two sisters, Margaret Moffat, Lafayette, and Myrle Ewing, New Smyrna Beach, Florida; four grandchildren, Todd (Dora) Emmons, Craig Emmons, Grant (Lynzy) Richey and Samantha Richey; and one great-grandson, Liam Emmons.
She was preceded in death by one brother, Lee Watkins, and her son-in-law, Robin Emmons.
A Funeral Service celebrating Jean's life will be held at 1:00 p.m., on Wednesday, October 13, at the First United Methodist Church, 1700 West State St., West Lafayette, with Pastor Duane Carlisle officiating.
Interment will follow in the Whiteman Cemetery, Michigantown, Indiana.
Friends will be received from 11 a.m. until the time of the service in the church.
Memorial contributions may be made to the American Cancer Society.
To send flowers to the family of Jean E. Richey please visit our Tribute Store.
Published by Fisher Funeral Chapel & Cremation Services - Lafayette on Oct. 15, 2021.
To plant trees in memory, please visit the Sympathy Store.
MEMORIAL EVENTS
Oct
13
Visitation
11:00a.m. - 1:00p.m.
First United Methodist Church
1700 West State Street, West Lafayette, IN
Oct
13
Service
1:00p.m.
First United Methodist Church
1700 West State Street, West Lafayette, IN
Funeral services provided by:
Fisher Funeral Chapel & Cremation Services - Lafayette
MAKE A DONATION
Please consider a donation as requested by the family.
MEMORIES & CONDOLENCES
1 Entry
May you rest in peace, you were such a kind person and neighbor.
Karen & Jeff at Liberty Collision Center New Smyrna Beach
Friend
November 11, 2021
Showing 1 - 1 of 1 results