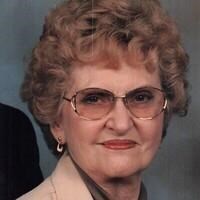 BORN
1927
DIED
2021
ABOUT
William Chrisman High School
FUNERAL HOME
Thurman Funeral Home - Richmond
507 East Main
Richmond, MO
Joan (Curtis) Hamilton, 94, of Richmond, Missouri, passed on September 1, 2021. Joan was born on May 21, 1927, to Ray and Orpha Curtis of Atherton and due to her mother's illness, was raised by numerous family members. Joan graduated from William Chrisman High School and on January 6, 1946, married her high school sweetheart, Harry Lee Hamilton. When Harry deployed for WWII, she was employed by Helzberg Jewelers on Independence Square and remembered walking from their Independence apartment to work in her high heels. After Harry returned from the war, the couple returned to Atherton to farm, and moved to Richmond in 1952 where they were always self-employed.

Joan enjoyed music and in addition to playing the organ and piano, performed for several years in "The Messiah Choir" at the RLDS Auditorium as well as "The Auditorium Chorus." She served in numerous offices at the Richmond RLDS congregation (now known as the Community of Christ) and composed and printed the church bulletin for many years. Joan was very creative and artistic and her crafts and paintings will live on. Her decorated cakes were one-of-a-kind, and her green thumb was notorious in the family.

Joan will be laid to rest on September 8, 2021, at Richmond Memory Gardens in a private graveside service.

In lieu of flowers, the family request donations to Shirkey Nursing and Rehabilitation/Activities, a memory-related care organization or a charity of your choice. Donations may be sent to Thurman's Funeral Home, 507 E. Main Street, Box 190, Richmond, Mo., 64085.