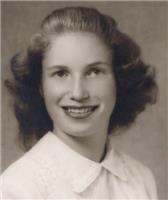 She grew up in the picturesque town of Huntsville Utah. She said that she had an idyllic childhood and enjoyed telling stories of her life growing up there.

After graduating from Weber High School, she married Darrel Owen Smith on August 23, 1950. They made their home in Roy, Utah. They had two daughters, Margo and Janice. In 1965, the family moved to Huntsville, Utah. Sometime later they divorced.

During her first marriage, Joanne took some courses at Stevens-Henegar College and began working for the IRS.

While working at HAFB, she was instrumental in helping physically challenged employees. She was able to get a TTY machine for a deaf employee and wheelchair access for a young man confined to a wheelchair. When she worked on the 1401 IBM printer, she took the initiative to help some summer hires who had stood against the wall for a week or so waiting to be trained. They expressed their appreciation for her help. Later she was commended for her actions.

On January 1, 1975, she married Hollis (Holly) Terry Francom. They were married for 44 years. They lived in Bountiful, Utah until Holly retired. They then moved to St. George, Utah where they spent many happy years and enjoyed the summer months at their cabin in Timber Lakes near the town of Heber, Utah and later at Snow Hall (dormitory) in Logan, Utah. In 2016, they moved to Ogden, Utah to be closer to their family.

She will be greatly missed by her family and friends. She was known for her courage, whit, fairness and leadership. She had a beautiful smile.

She is preceded in death by her parents, Daniel and Emma, two sisters, Virginia Felt and Edna Roberts, two brothers, Nelson and Leland Felt.

We express our sincere gratitude to Andrea, Deana, Cassidy and Andrew from Community Nursing Services of Layton for their compassion for, and service to our mother and her family.

In lieu of flowers, donations may be made to the American Heart Association.