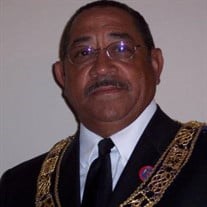 FUNERAL HOME
Voss and Sons Funeral Service
316 N. Chestnut Street
Seymour, IN
Mr. John Richey, 74, of Seymour, passed away on October 4, 2021 at Norton Hospital in Louisville, Kentucky. He was born in 1946, son of the late James and Helen Colbert Richey in Seymour. John proudly served his country in the United States Army, including in the Vietnam War. He married Donna Shelton in 1969, and she survives. John was an active member of Second United Methodist Church of North Vernon. He was also a Mason and highly active with the Masonic Lodges and Temples. He was the past Potentate of Tyre, Temple 129 of Columbus, Indiana, Deputy of Oasis, past Commander in Chief of Malta Consistory 34, past Master of Golden Crown Lodge #34 in Columbus, Indiana, Chairman of Benevolence Foundation MWPHGL, past District Deputy Grand Master Southeastern District, member of National Association for Black Veterans, Inc., and Dr. Solomon Wallace class of 2016. John was a Shriner and a past school board member for Seymour Community Schools. He was also the former owner of Jim's Body Shop in Seymour, which his father started in 1955 and his sons own today. He loved to fish and golf. John had many hobbies, but his favorite pastime was spending time with his family which he loved deeply. This includes his many friends with whom he also considered family.
Along with his beloved wife, he is survived by his children, Michael Richey, Darren (Tricia) Richey, and Kristin (Walt) Glenn. He was "GrandDad" to Mychal (Emily) Eagleson; Raelyn Richey; Christopher, Troy, and JC Glenn; Reese and Onyx Richey; great grandson, Grant Eagleson; and brother to Nancy Siler.
John is preceded in death by his parents.
Visitation will be held on Sunday, Oct. 10th from 2-7 at Central Christian Church, 1434 W. 2nd St. Seymour, IN 47274.
Funeral service will be held at Central Christian Church on Monday at 11am with visitation starting at 9am.
Bishop Johnnie Edwards, Pastor of 2nd UMC North Vernon will offer the eulogy, and Rev. Dr. Bruce R. Rose, Pastor of Second Baptist Church-Bloomington will be officiating.
Burial will take place at Madison Veterans Cemetery on Tuesday at 11am with full military graveside rites.
The family kindly requests that masks be worn inside the church at all times.
In lieu of flowers, memorials may be written to Second United Methodist Church of North Vernon or St. Jude Children's Research Hospital.
All arrangements have been entrusted to Voss & Sons Funeral Service in Seymour.
Published by Voss and Sons Funeral Service on Oct. 7, 2021.
To plant trees in memory, please visit the Sympathy Store.
MEMORIAL EVENTS
Oct
10
Visitation
2:00p.m. - 7:00p.m.
Central Christian Church
1434 W, Seymour, IN
Oct
11
Funeral service
11:00a.m.
Central Christian Church
1434 W, Seymour, IN
Oct
12
Burial
11:00a.m.
Madison Veterans Cemetery
Funeral services provided by:
Voss and Sons Funeral Service
MEMORIES & CONDOLENCES
1 Entry
I just found out, you are in my prayers.
Janie
Family
October 24, 2021
Showing 1 - 1 of 1 results