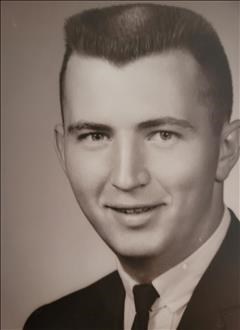 FUNERAL HOME
Brenner Mortuary
114 E. 4th St.
Pittsburg, KS
Beloved husband, father, grandfather, and brother. John A. Shattuck Sr., 77, of Pittsburg, KS, passed away on September 22, 2021, at his home in Pittsburg, Kansas.
John was born on June 15, 1944 to John Ward and Margaret Louise (Anderson) Shattuck in Pittsburg, Kansas. On March 26, 1964, he was united in marriage to Irene Griffith at the Nazarene Church in Pittsburg, Kansas.
John worked for most of his life for Trans World Airlines in Kansas City, Missouri as a electronics supervisor. Until the family moved down to Pittsburg where he worked for the City of Pittsburg until his retirement.
He enjoyed anything to do with airplanes, flying, working on them or just going to see them in a show. He also loved trains, corvettes and spending time with his grandkids. He also enjoyed spending time with his Christian brothers and sisters, especially Jerry Kendall and their very adventurous road trips.
He is survived by three children, John Shattuck Jr. (Lynnette) of Liberty, MO, Steven Ray Shattuck (Bo Ramsey) of Warrensburg, MO, and Carrie Louise Shattuck-Wilcox (Chris) of Pittsburg, KS; three grandchildren, Skylar Shattuck, Jordyn Shattuck, and Nova Wilcox; and one sister, Deanna Currie of Wichita, KS.
He is preceded in death by his parents.
At his request, John has been cremated. A Celebration of Life will be at a later date. The family suggests Memorial donations to Lamar Church of Christ, Crawford County Church of Christ, or Harry Hynes Hospice. Friends may leave online condolences at www.brennermortuary.com
Published by Brenner Mortuary on Sep. 24, 2021.
To plant trees in memory, please visit the Sympathy Store.
MEMORIAL EVENTS
To offer your sympathy during this difficult time, you can now have memorial trees planted in a National Forest in memory of your loved one.
Funeral services provided by:
Brenner Mortuary
MEMORIES & CONDOLENCES
0 Entries
Be the first to post a memory or condolences.