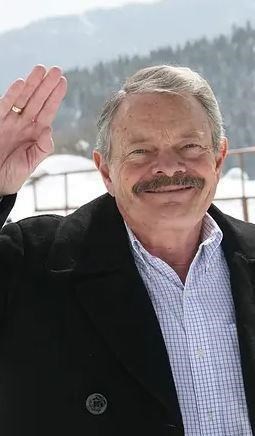 John was born just weeks into the opening scenes of the atomic age on August 18th, 1945 in the tiny town, of Lima, Ohio. The family home was in nearby Wapakoneta. Johnny, as he was known till he got married, was the fourth of six children and spent his toddler years in Ohio with his mother Videtta, a homemaker, and his father, Wendell, an electrical engineer turned salesman, turned entrepreneur. Johnny was the first boy to three older sisters who smothered him with affection and teased him equally. Johnny's years in Wapakoneta were brief. The Spears moved west, returning to Colorado in 1948, to be closer to family in Pueblo, and to make their home in the shadow of Pikes Peak in Colorado Springs.

Johnny's formative years were often spent with his dad. The opening of fishing season brought fond youthful memories of trips to the river with his dad, his grandpa Pappy, and the other old men. Johnny was sociable and got along with other kids but in those younger years, he chose to spend a lot of his time with his dad. He wanted to do whatever Wendell did. He learned whatever Wendell would teach him. On weekends Johnny would follow his dad around down at the family business [The Plant] or Spear Engineering as the company was called. This building was a place of large one-off machinery and tools of every kind. Johnny traced his father's steps as Wendell went about repairing machines. When Johnny wasn't with his dad, he enjoyed creative games with his sisters, sometimes becoming the character [Colonel Popcorn] to his sister Dottie's superior [General Headquarters].

Johnny enjoyed California beach trips in the near-legendary family Cadillac and a certain trip to Arizona in an early era [sublime/ridiculous] Volkswagen Samba bus. Johnny formed a lifetime love for cars in all their variations. He taught himself to drive in the family's roomy 1-acre front yard in his sister's 1948 Oldsmobile. From those days forward there was never a time Johnny was without a car or a motorcycle, or both.

In high school, Johnny met and fell deep for Carolyn Manning. They were married on March 9th, 1963. And in a flash, John had started a new family, graduated from Wasson High School, and attended Adams State in Alamosa Colorado. The family then moved to Bountiful Utah where John sold shoes at Keith–O'Brien's, a historic building in downtown Salt Lake City. Not long after, like his father before him, John felt that pull to Colorado Springs. They returned with their family and John and Carolyn remained there until 2017.

John worked for a time at Plateau Natural Gas as a computer programmer. Then, in 1972 when John's father passed away he assumed responsibility for Spear Engineering. While John was deeply familiar with this company, its employees, and its machinery, Spear Engineering was not the windfall inheritance it might have been. Financials from those days would reveal a young startup company that was barely profitable. But John took this responsibility on, surrounding himself with some of the most talented people in Colorado Springs and he expanded what he had taken on. John earned the trust of his father's employees. He had their hopes, and time and time again John proved he had their backs. For more than twenty years, he led the business in product development, marketing, and sales. He led Spear Engineering through significant financial wins and losses. He welcomed the changing world of technology, embracing new methods of printing and automation. John's work and development at Spear Engineering would span into the next generation with his family, providing a comfortable living for his wife and children as well as John's aging mother and his two younger brothers.

Like the pendulums on so many of his clocks, John was equally and perhaps best remembered for his ability to counter hard work with play. John surrounded himself with a roster of lifetime friendships ranging from drunks to doctors and from mechanics to missionaries. Through Carolyn's quiet and loving example, and John's own earnest study and questioning, he gained a testimony of the gospel of Jesus Christ. As a symbol of this realization and his new commitment, John was baptized, joining The Church of Jesus Christ of Latter-day Saints early in their marriage. John had proven he would do anything for Carolyn. But the decision to give up vices and to be baptized was his alone. On June 9, 1967, John and Carolyn would renew and extend their marriage commitment. They made additional promises to each other and their children both for this life and for the eternities to come within the temple in Salt Lake City. His commitments and church affiliation would offer John a landscape of opportunities to refine his particular way of service, unconditional love, and leadership. The church was ever a fountain of friendships and growth for John.

So many friends will recall years of near-mythical road trips with John. These were days of caravans and Diet Coke, of friends and their families. Cars and yellow Chevy vans were saddled with snow skis, or boy scout gear, or ski boats arriving at any number of destinations including, Breckenridge, The Pikes Peak Hill Climb, or Lake Powell. It could easily be argued that John was a sea captain in a previous life. He was always at his best in the fair winds under the blue skies, floating on the blue waters in his boats. He earned windswept tans on the lakes and in the mountains. This weathering gave John premature smile lines and a lasting look of experience.

John understood that the adventure was in the journey and these adventures always began behind the wheel. Most importantly adventure always had a soundtrack. John loved the rhythm. He kept his silver drumset set up in the basement and could always pick up the sticks and knock something out. He loved music and the technology that gave it life. From Jazz to Rock, John kept the music playing. On 8-tracks and iPhones, his busy hands always had the bass, mids, and highs, tuned flawlessly, with the volume turned up to eleven.

Like John's father, he incorporated his children into life at Spear Engineering. Summer-time jobs at [The Plant] gave John's children a birdseye view of what he did there and how he kept things going. John seemed to have a handle on work-life balance long before it was in style. He was ever available for late-night drives, long talks, maybe some needed correction, and time at the property and cabin at Eagles Nest. John was there for early pivotal times for each of his children. He was available for his children during those formidable years. He was proud of each of them and encouraged them to dream.

John was especially proud of his only daughter Suzanne. He enjoyed her beauty, talents, and potential. Suzanne passed away far too young in her early twenties in a fatal car accident. She left a young husband and her only son behind. But it seemed she took a part of John with her as he would never completely work through the grief and loneliness of her loss.

As John and Carolyn became empty-nesters they enjoyed periods of work and grandchildren. John explored a life beyond Spear Engineering through new partnerships, employment, and business development. His ongoing service in the church was expanded and it served as an outlet for the culmination of qualities that reflected John's approach to life. From visiting widows to visiting prisoners, John displayed a dedicated period of outward love, service, and generosity that changed so many lives.

John maintained a collection of clocks and pocket watches; and managed to keep many of them ticking hour after hour. These instruments of time observed and measured John's life through his sunset years. They witnessed and marked expanding periods of depression and mental and physical disability. They also saw a reflection of giving and goodness returning to John and Carolyn in their times of need.

After living in Colorado Springs for more than 45 years, with children grown and gone, John and Carolyn retired and moved to Queen Creek, Arizona. Once again, they would establish themselves, care for each other and fill their life with Pekinese puppies, service, and new friendships; touching more people with their hospitality and love.