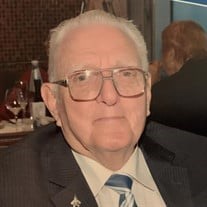 FUNERAL HOME
Ford Funeral Service, Inc. - Midwest City
305 S. Sooner Rd.
Midwest City, OK
Master Sargent Joseph Michael Lally, 82, of Midwest City, OK, passed from this world on October 10, 2021. He had a long and distinguished career in the United States military, serving in the both the United States Army and United States Air Force for nearly 22 years. He was a decorated veteran, receiving many honors, serving in Southeast Asia (Vietnam) and the Middle East, retiring as Master Sargent of the Air Force at Tinker Air Force Base, Oklahoma.
Master Sargent Lally was born March 29, 1939 in Waltham, Massachusetts to his parents, William and Marion Lally. Having initially served in the US Army, he switched to the US Air Force eventually meeting his future wife, Anita, where they both worked in the encrypted intelligence field.
Following his career in the Air Force he started a second career with the ITT Corporation, retiring after 20 years and then a third career with Boeing, retiring after 10 years. He spent more than 50 years protecting his country, family and friends. He enjoyed playing, coaching and refereeing sports with his children, was an excellent bowler, a golfer and enjoyed watching "his" Boston Red Socks and New England Patriots.
He was preceded in death by his parents and his siblings, his wife of forty-nine years, Anita Mae Parthemer Lally and his daughter, Jean Ann Lally Runkle. Joe, as he was known, is survived by his children and their spouses; daughter, Ruth E. Haynes (Doyle) of Blanchard, OK; son, Michael H. Lally (Alice) of Arlington, TX; daughter, Patricia M. Escoe (Arthur) of Sachse, TX; 22 Grandchildren (and spouses), 21 great grandchildren, his good friend and traveling partner Catalina Stein, of Moore, OK and many other friends.
Funeral services are Saturday, October 16, 2021 at 2:00pm, in the Candlewood Chapel at Ford Funeral Service, 305 S. Sooner Road in Midwest City. Burial will be on Monday, October 18, 2021 at 9:00am, at Fort Sill National Cemetery, Elgin, OK. In lieu of flowers, donations can be made in his name to: Trinity Kids, Inc., 2704 Fox Creek Trail, Arlington, TX 76017 or at www.trinitykids.org.
Published by Ford Funeral Service, Inc. - Midwest City from Oct. 12, 2021 to Jan. 4, 2022.
To plant trees in memory, please visit the Sympathy Store.
MEMORIAL EVENTS
Oct
16
Memorial service
Ford Funeral Service - Candlewood Chapel
315 S. Sooner Rd, Midwest, OK
Oct
18
Graveside service
Ft. Sill National Cemetery
2648 Dunn Rd., Elgin, OK
Funeral services provided by:
Ford Funeral Service, Inc. - Midwest City
MEMORIES & CONDOLENCES
1 Entry
The first time he entered my office several years back he looked around and pointed out the dust on top of our antique phone, said our lights were streaked, and he usually doesn´t visit an office where people don´t wear name tags. First impression might have been to feel a little defensive, and we literally put a note on our schedule to clean extra before his visits. He was older and had lots of stories and boy was he observant, but he would take me aside and give me motivational talks about how to be a better business professional. This guy had literally been all over the world, and many might dismiss him for his criticism, etc. ...but something about his energy and interest in making me a better businesswoman captivated me and when I built my new office he was the first to send me a proud of you letter and a housewarming gift ...and he became one of my favorites and I began to look forward to his visits, and every year he sent a plant to me, "his dentist" and who knows how many others at New Years because he believed in people and as you RIP J.L. know I listened and appreciated advice from a wise man and I promise to water the plants!!!!
Melanie Emerson
Other
October 12, 2021
Showing 1 - 1 of 1 results