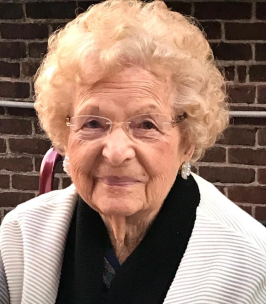 FUNERAL HOME
Kloecker Funeral Home & Crematory, Inc. - Erie
2502 Sassafras Street
Erie, PA
Julia M. Hauser passed away peacefully from natural causes on October 18th 2021, at the age of 101.
Though born in Youngstown, Ohio on August 23rd, 1920- Mother spent the first eight years of life in remote central Europe. Julia Seaman, her Erie god-mother, then fostered Julia and her brother John for the next ten years, ultimately adopting both children.
The return voyage to native soil included a sail past Lady Liberty and the Ellis Island immigrant experience. Transitioning to life in the U.S. posed the usual challenges of assimilation: language and culture. Julia mastered the English language in short order- though fluency in Hungarian, her first language, slowly waned.
Julia supported the WWII efforts with gainful employment at the Erie Resistor and American Sterilizer. Her beau, Henry, was abruptly drafted into military service. What followed was a diligent four-year prayerful correspondence with Hank, who did return unscathed from his AAF duties.
Marriage soon followed. The first half of her adulthood was spent raising four children, volunteering at St. John's and owning-managing Julia's Beauty Salon.
European hostilities again flared in the mid-1950's in the form of the Hungarian Revolution. Bi-lingual translators, including Julia, were recruited by the Erie Diocese to assist refugees with transitional needs- most notably, employment and housing. She fondly reflected on her prior community activist role and enjoyed the lifelong friendships acquired in the process.
Julia also managed a ten-year employment run at General Electric, prior to retirement. During this time, both she and Henry shouldered major eldercare responsibilities: first for her adoptive mother, then later, birth mother. Special thanks to Henry for his gracious assistance.
Full retirement mode followed, and both Julia and Henry enjoyed many relaxing days at the mountain cabin in the company of friends and loved ones. A number of winters were joyfully spent snow-birding in coastal Florida.
Julia was predeceased by her husband, Henry, and eldest son John. Surviving her are sons, David (Mary Ann) and Dr. Joseph Hauser, and daughter, Dr. Julie Hauser (Matthew). Julia is also survived by six grandchildren and seven great grandchildren.
In lieu of flowers, Julia requested donations to Blessed Sacrament Church or a local charity of your choice.
Visitation will be at the Kloecker Funeral Home and Crematory, Inc. 2502 Sassafras St. Erie, PA 16502 on Friday, Oct. 29th from 3pm to 7pm. The Funeral Mass will be held at Blessed Sacrament Church on Saturday, Oct. 30th at 11am with Julia's great-nephew, Father Mark Hoffman, co-officiating. Send condolences to www.kloeckerfuneralhome.com.
Published by Kloecker Funeral Home & Crematory, Inc. - Erie on Oct. 22, 2021.
To plant trees in memory, please visit the Sympathy Store.
MEMORIAL EVENTS
Oct
29
Visitation
3:00p.m.
Kloecker Funeral Home & Crematory, Inc.
2502 Sassafras St., Erie, PA
Oct
30
Funeral Mass
11:00a.m.
Blessed Sacrament Church Fr. Mark A. Hoffman
1626 W 26th St, Erie, PA
Funeral services provided by:
Kloecker Funeral Home & Crematory, Inc. - Erie
MEMORIES & CONDOLENCES
2 Entries
I am so glad I got to visit with your Mom when we were in Erie this summer. She was an amazing woman.
Christine Duchek
October 24, 2021
So sorry to hear of her passing. She was a very special lady and we enjoyed her company when we had the privilege of seeing her. Always attractive in her appearance complete with her makeup and jewelry and a smile. She will be missed by everyone that knew and loved her. Rest In Peace.
Sandra & David Sasso
Friend
October 24, 2021
Showing 1 - 2 of 2 results