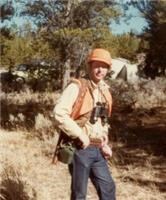 Ken was born on October 8, 1938 to Virginia Collins and Donald Henry Clinger in Mapleton, Utah, and later moved to Payson where he lived across the street from his future wife Joanne Pierce. Ken was the 3rd child, and only boy growing up with 6 sisters. He spent his youth in Payson raising sheep for 4H, roaming the neighborhood on stilts with his sling shot, delivering newspapers, gathering fruit from local orchards during the summers, and playing with his dog Spot. He was chosen by the American Legion to attend Boys State at Camp Williams in 1955.

Ken enlisted in the Air Force after graduating in 1956 from Payson High School. He was stationed at Lake Charles, Louisiana where he worked as an aircraft and engine mechanic on the B-47 Stratojet. After serving in the Air Force, Ken returned home to Utah and began dating Joanne. They soon married on August 18, 1962 in the Manti, Utah Temple.

Joanne encouraged Ken to attend the University of Utah, where he received a degree in Pharmacy. He worked at Skaggs Drug Center, Skaggs Alpha Beta, Payless Drug, and eventually Rite Aid, as the drug store was sold over the years.

Ken loved to be outdoors. He developed many hobbies over the years that allowed him to enjoy the beauty of our Lord's creations, including antique bottle collecting, running marathons, motorcycling, camping, fishing, hunting, gathering deer antler sheds, hiking, gardening, landscaping, and crafting unique walking sticks. He recognized the beauty of nature, even in its smallest details, and loved gathering and polishing rocks, especially from the Pacific Northwest Coast.

Ken's most beloved interest was spending time with family. He was especially proud of his two boys, Guy and Brett. He enjoyed traveling, working, and playing alongside them. They have been and always will be his best friends.

Ken was a devoted member of the Church of Jesus Christ of Latter-Day Saints. He loved our Heavenly Father and Savior Jesus Christ dearly, and that love was continually made manifest in the way he served and cared for others. He served in many callings throughout his life including Elder's Quorum President, Stake Missionary, and High Priests Group Assistant. However, the time he served in the temple was the most precious work to him.

Ken will be remembered for doing the Lord's work. He had an endless desire to serve and lighten the burdens of others. He was never satisfied with an act of service being finished until he had gone at least the extra mile. Ken was quiet and sometimes reserved but came alive with exuberance whenever he had the opportunity to share his interests with others. He had a deep love and settled testimony of our Heavenly Father and Savior Jesus Christ. He eagerly looked forward to sharing that testimony with others, most often through his actions. Ken was a true minister.

Ken always regretted missing out on the opportunity to serve a full-time church mission, and we are grateful he is getting that opportunity now. We are confident that he is anxiously engaged in sharing the gospel with everyone that he can.

We are grateful to the doctors and nurses of St. Mark's Hospital for their genuine and dignified care of Ken. Due to the restrictions and concerns of gathering during the pandemic, a private graveside service will be held for the immediate family only. A virtual gathering for extended family will follow. We feel incapable of adequately expressing our gratitude for the outpouring of love for Ken and our family at this difficult time. We sincerely appreciate the many expressions of love and support.

In lieu of flowers, please consider making a donation to the Church of Jesus Christ of Latter-Day Saints Temple Construction Fund.

The Graveside service will be streamed live on the Russon Brothers Facebook page at 11:00 a.m. on December 4, 2020. Https://www.facebook.com/russonmortuary
To plant trees in memory, please visit our Sympathy Store.
Published by RUSSON MORTUARY AND CREMATORY from Dec. 2 to Dec. 3, 2020.
MEMORIAL EVENTS
No memorial events are currently scheduled.
To offer your sympathy during this difficult time, you can now have memorial trees planted in a National Forest in memory of your loved one.
Funeral services provided by:
RUSSON MORTUARY AND CREMATORY
GUEST BOOK
3 Entries
To Brett, Danielle and Family I am so sorry to year of your loss. I know Ken was a wonderful man. I pray that your whole family will be comforted and that all will be well with you.
Kolene Briggs
December 15, 2020
Kenneth served the Salt Lake Temple for many years. His warm and welcoming countenance greeted thousands as they came to worship. He exemplified the spirit of love that characterizes the treasured spirit of sacred Temple service. Always with a kind word and a smile. Kenneth brightened our days. We wish the best to his family and the many friends who celebrate a wonderful life. Much, much love, Jack and Rosemary Wixom
Jack Wixom
Coworker
December 2, 2020
Thanks Uncle Ken, for always caring, for always encouraging. A constant example of good.
We love you Clinger’s, even in your loss you are a source of faith and strength! I am eternally grateful for your family and proud to be part of it.
Lyman
Family
December 1, 2020