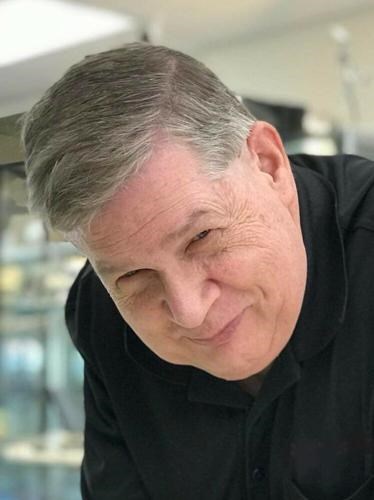 ABOUT
Olympia High School
FUNERAL HOME
Funeral Alternatives of Washington - Lacey
2830 Willamette Drive North East
Lacey, WA
Obituary of Kenneth Leroy Layton
Born August 3, 1955, at Fort Ord, California, and a resident of Thurston County for nearly 50 years, passed away peacefully at his home on October 26, 2021.
Ken's younger years were filled with family moves from California to Olympia to Tumwater, then back to several cities in Central California between 1966 and1972, when the family returned to Olympia. Ken graduated from Olympia High School in 1973.
Ken had a varied and fun-filled (seriously!) career repairing pinball machines, video games, old movie projectors, old radios, and old cameras. He was self-taught: reading books, magazine articles, talking to various people in person and over the phone, and as technology changed, the Internet. Over the years, he became one of the most knowledgeable references for the repairing of arcade and theater projection equipment, and was well known for helping people throughout the United States and around the world with his wisdom and advice.
In the amusement industry, Ken worked at Capital Amusements for many years, honing his skills. Then he worked with Steve Mildenberger for over 20 years (Steve's Amusements), repairing and restoring pinball machines and video games. Most recently he worked with Welby Bergum (the Olympia Pinball Museum).
Over the years, Ken was also a projectionist at downtown Olympia movie theaters and at the Skyline Drive-In Theater in Shelton. He was a wealth of historical knowledge of the original, "old time" theaters like the Capitol, the Olympic, and the State Theaters in downtown Olympia, the Sunset Drive-In Theater in Tumwater, and the Lacey Drive-In Theater. He helped others with repairs or restorations of other movie theaters in the Pacific Northwest, including the Fox Theater in Centralia. He also enjoyed helping Michael Fritsch with various projects around the Eastside Big Tom property.
Ken obviously loved working on all those machines, but he also loved old movies, old classic cartoons, and old TV shows, especially the Three Stooges, Lost in Space, and Green Acres. He had quite a collection of those shows, and many others, on VHS tapes, as well as many books about his favorite shows.
Ken had many lifelong friends and associates who will miss him.
He was preceded in death by his parents, Frederick L. Layton and Shirley J. (Wright) Layton. He is survived by younger brother, Gene Layton (Marty Wiebe) of Centralia; sister, Marie Holts of Lacey; stepbrothers, Bruce (Jeanette) Adams of Olympia, and Jeff Adams of Alaska; stepsister, Kelly Adams of Bellingham; nephews, Sam Layton of Olympia and Rob Holts (Chyvonna) of Wenatchee; nieces, Amy Layton of Olympia and Rachel Holts of Lacey; grandniece, Alexandra Holts of Lacey; uncle, George Layton (Carol) of Delta, Colorado; aunt, Charleen (Roger) Oscar of Tacoma; uncle, Russell Maninger; aunt, Joyce Spurgeon; aunt, Joann Kwandibens; aunt, Linda Triplett; aunt, Nancy McMahon (Frank); and numerous cousins across the country.
A Celebration of Ken's life will be held in Spring 2022.
To send flowers to the family or plant a tree in memory of Kenneth Layton, please visit Tribute Store
Published by Funeral Alternatives of Washington - Lacey on Nov. 16, 2021.
To plant trees in memory, please visit the Sympathy Store.
MEMORIAL EVENTS
To offer your sympathy during this difficult time, you can now have memorial trees planted in a National Forest in memory of your loved one.
Funeral services provided by:
Funeral Alternatives of Washington - Lacey
MEMORIES & CONDOLENCES
7 Entries
What a loss. He was one of a kind. Ken always had the answer how to fix ore repair projectors.. Everyone love and respected Ken including me. A kind and generous soul. RIP Kenneth.
John Pommon
December 6, 2021
RIP Ken, your knowledge on all things 16mm will be missed greatly, with regards Patrick Walsh, Christchurch, New Zealand
Patrick Walsh
Friend
November 20, 2021
Will be missed among many friends. Great guy always offering advice and help.
Dan Lail
Friend
November 19, 2021
My condolences to Ken´s family and friends. I met Ken online through a film/projector forum. He was a wonderful, kind, knowledgable man who helped many on the Forum. He will be greatly missed by the Forum members.
Barry Fritz
Other
November 19, 2021
God has set a place for you next to his projector stand, dear Ken. Farewell, good sir. God bless you, always.
Brad Kimball
Other
November 18, 2021
Ken worked on my 16MM pedestal machines. He was featured in a local newspaper next to the projectors I had him working on that I drove to him from Nashville, TN!
Tom Wills
Friend
November 18, 2021
Knew Ken via the internet, from back in the early dial-up and bulletin board days...and his participation on various theatre-related websites and chat lists. He had a lot of hobbies that were tied to preserving Americana and he was a great resource of info for the rest of us. I am sorry to see him go. May he RIP.
Justin West
Friend
November 18, 2021
Showing 1 - 7 of 7 results