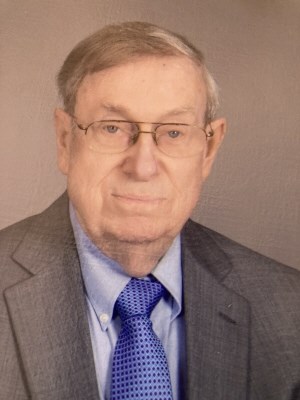 FUNERAL HOME
Ratterman Brothers Funeral Home - East Louisville
12900 Shelbyville Road
Louisville, KY
Larry Taylor, 88, of Louisville, passed away September 14, 2021 at Baptist Health of Louisville.
He was born on April 17, 1933 to the late Thomas Carl and Ruth Taylor in Benton, Pennsylvania. He attended Benton High School and graduated in 1951. He then went to the University of Kentucky, where he graduated in 1955 with a Bachelor of Science in Industrial Engineering. While studying at the University, he met his adoring wife, Betty Burroughs, and they were married in 1955.
He went to the Naval Officers Candidate School in 1956. He then served in the U.S. Navy until 1959. Upon release from the Navy, he began his professional career at Ford Motor Company Louisville Assembly Plant as a Process Engineer, where he worked for 31 years.
After retirement, he and his wife enjoyed traveling, and enjoyed many trips to Hawaii, Canada, and touring Europe.
He was a member of Hurstbourne Christian Church, where he served as an Elder, and sang in the Church choir. Larry loved singing and shared his incredible musical talents, and beautiful base voice as a member of several local choirs, including The Joyous Singers.
He is preceded in death by his parents, his brother, the Reverend Richard Taylor, and his sister, Elaine Hartman.
He is survived by his wife of 65 years, Betty Taylor, two daughters, Carole Dickerson (Richard), Cathy Taylor, and a son, David Taylor. All live in Louisville, Kentucky.
Rattermans Funeral Home, Shelbyville Road, Middletown, Kentucky is in charge of cremation. The Memorial Service will be at Hurstbourne Christian Church, 601 Nottingham Parkway, Louisville, Kentucky (date to be determined). There will be visitation prior to the Service.
In lieu of flowers, please make donations to Hurstbourne Christian Church.
Published by Ratterman Brothers Funeral Home - East Louisville on Sep. 16, 2021.
To plant trees in memory, please visit the Sympathy Store.
MEMORIAL EVENTS
To offer your sympathy during this difficult time, you can now have memorial trees planted in a National Forest in memory of your loved one.
Funeral services provided by:
Ratterman Brothers Funeral Home - East Louisville
MEMORIES & CONDOLENCES
0 Entries
Be the first to post a memory or condolences.