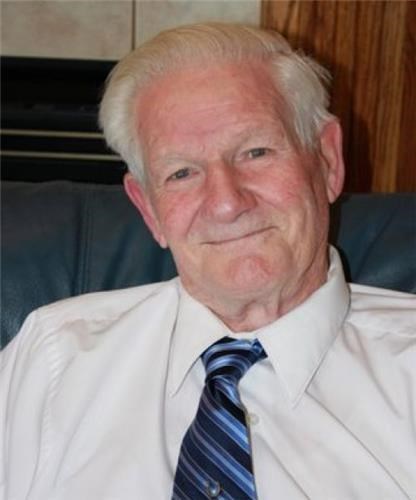 On Sunday, October 3, 2021, after a lifetime of service, Lawrence Revere Chambers put down his hammer and saw and peacefully joined family and friends on the other side of the veil where he will continue to love and serve.

On December 1, 1928, Revere was born in Smithfield, Utah, to Lawrence Theo "Larry" and Carol Egan Chambers. He was one of five children. As a child of the Great Depression, he learned self-reliance, hard work, sacrifice and gained a giving heart. He was baptized a member of The Church of Jesus Christ of Latter-Day Saints.

He graduated from Davis High School in 1947 and married Luana Hansen on October 13, 1948, in the Logan Temple, where he made sacred covenants that he honored all the days of his life.

Two months after their wedding, he left on a mission to the Hawaiian Islands. Upon his return, they began a life together in Syracuse, Utah, and lovingly welcomed five children. He often reflected on the lessons he learned in Hawaii and shared them with his children and others many times throughout his life.

Revere was a builder: a builder of homes for several family members and his own. He owned an HVAC company and was a master electrician. In addition, he was a builder of young men, serving many years in scouting and teaching the electrical trade at Davis High School.

He and Luana had a love for life and people. They traveled all over the world with family and life-long friends. Their greatest joy was with loved ones at "the cabin" they built in the Uintah Mountains.

Revere and Luana were called in their early 50s to serve a full-time mission to Des Moines, Iowa. Serving required them to leave jobs they loved and exercise faith to find new employment upon returning home.

After they retired, they served another full-time mission in the Nauvoo Restoration Mission, requiring his building skills once again. He served seven missions for the church. He always said, "The best days are the days when we were called to serve."

The hardest year of his life followed the death of his beloved wife Luana in 1998. He married Emma Louise Davis in 1999, and they lived in Samaria, Idaho. During their sixteen-year marriage, he made many new friends, continued to build, and faithfully cared for Emma.

In 2017 at the age of 89, he built his final home in Portage, Utah, with the help of his family. He loved driving the backroads and the quiet countryside. He loved his independence and his new ward in Portage. He was thrilled when asked to bless the sacrament and served in the Primary.

He endured well to the end of his life and left an example to all of cheerfulness and positivity. He was a great storyteller, especially about his ancestry, and shared his experiences, wisdom, and testimony with everyone.

He is survived by four children, Dana Love and her husband, Robert (Syracuse), Dee R Chambers and his wife, Ann Wolthuis (Troy, Idaho), Marianne Finlinson and her husband Douglas (Syracuse), Jeff Chambers and his wife Alison Fisher (Clinton), Bonnie Mann a sister-in-law, Curtis Bybee a brother-in-law and Bob and Karen Thalman an aunt and uncle. His posterity includes 19 grandchildren, 39 great-grandchildren, and three great-greats.

He was preceded in death by his wife Luana and their son Brad, his wife Emma Louise, his parents, and his siblings.