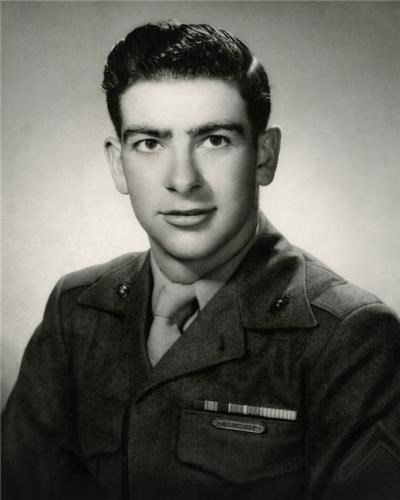 Our beloved husband, father, grandfather and great grandfather, Lloyd Westley Pies, 86, passed peacefully from this life on October 8, 2021, surrounded by his family, after a courageous battle with cancer.

Lloyd was born September 18, 1935 in Milbank, South Dakota to Nickolas Francis and Julia Mae DeMaris Pies. He was the third of eleven children.

He joined the United States Marine Corps during the Korean conflict at the age of 17 where he served as a Corporal and Sergeant for four years. He received an honorable discharge.

While attending the marriage of his brother in Utah he met his sweetheart, Alice Fern McDonald. They were married on August 16, 1957. Their marriage was later solemnized in the Salt Lake City Temple.

Lloyd worked for the Union Pacific Railroad for 40 years as a carman. He was a dedicated employee and would often be called out for several days at a time to assist with the clean-up of derailed trains where he operated the Pettibone crane. His love for cooking provided him the opportunity to become the head cook for the derailment crew. Lloyd loved trains and shared that love with his children, grandchildren, and great grandchildren often traveling to Promontory Point, Utah to watch the reenactment of the wedding of the rails. He never turned down an opportunity to take his family on a short train ride when the old steam engines came to Salt Lake City. You would always find a train circling the track under the Christmas tree.

Lloyd was a faithful member of the Church of Jesus Christ of Latter-day Saints. He had a strong testimony and had a great love of the gospel. He loved serving. He served in the Elders Quorum Presidency, as President of the Stake Seventy Quorum, as a building coordinator, and a nursery leader where he served for 5 years. This was a calling he really loved and was often referred to as Grandpa by the children. Lloyd and Fern served together at the Genealogy Library in Salt Lake City as part of a service mission for the church.

Lloyd and Fern loved to travel and would often take 2-3 grandchildren with them. His favorite place to visit was South Dakota where he was able to visit one last time this past August.

Lloyd will be missed by all who knew and loved him.

The family would like to express our gratitude and appreciation to the physicians, nurses, and staff at McKay Dee Hospital, as well as Wendy (RN), from Encompass Home Health. Also, the staff from Atlas Hospice, Bart, Debbie, Angela, Rick, and especially Josie (CNA) and Melanie Jeppsen (RN) for their sweet, compassionate, and loving care towards the end of Lloyd's life.

In lieu of flowers please consider donating to the Church of Jesus Christ of Latter-day Saints missionary fund.