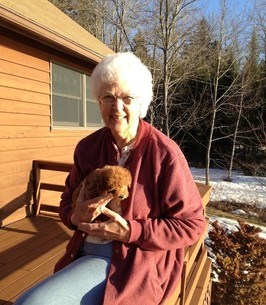 FUNERAL HOME
Hall Funeral Homes & Cremation Services - Waldoboro
949 Main St
Waldoboro, ME
Marjorie Jean Goodwin Flood passed away peacefully at home early on the morning of November 19th, 2021. She was born on June 14th, 1934 in Boston, Massachusetts. Marjorie, or "Marge," as she was known by her many friends, was raised on Brooklawn Avenue in Augusta, Maine in a house built by her father.
She met the love of her life, John Flood, while attending Cony High School in Augusta. Marge attended Gordon College for one year in 1952 before going on to nurses training at the New England Baptist Hospital. While there, she spent many days caring for polio patients in the iron lung wards. She earned her RN degree in September of 1956, and she and John were married on December 8th of the same year. They were happily married for almost 65 years.
Marge put her career on hold and stayed at home to raise her 4 sons. Living as the only female in a house of 5 males taught her patience above all else. After her children reached the age that they did not need constant supervision, she returned to work as a nurse. She got recurrent training and went on to work as an obstetrics nurse for many years at the North Country Hospital in Newport, Vermont. She delivered countless babies there including her first grandchild. After retiring from nursing, Marge and John built their dream house in Friendship, Maine. Marge became very involved with the Friendship United Methodist Church where she sang in the choir.
She is survived by her husband, John; brother, John S. "Jack" Goodwin; sons, Scott, Tim, Don and Randy; three daughters-in-law, Ann, Julee, and Jen; 11 grandchildren and 3 step-grandchildren; and 5 great-grandchildren. She will be greatly missed by all who knew her.
Funeral services will be held at the Friendship United Methodist Church at 24 Main St in Friendship, ME on Saturday, November 27th, at 10:00 a.m.
Donations can be made to the Friendship United Methodist Church, 24 Main Street, Friendship, ME 04547.
Arrangements are entrusted to Hall Funeral Home and Crematory, 949 Main Street, Waldoboro. Condolences may be shared with the family at www.hallfuneralhomes.com
Published by Hall Funeral Homes & Cremation Services - Waldoboro on Nov. 22, 2021.
To plant trees in memory, please visit the Sympathy Store.
MEMORIAL EVENTS
Nov
27
Service
10:00a.m.
Friendship United Methodist Church
24 Main Street, FRIENDSHIP, ME
Funeral services provided by:
Hall Funeral Homes & Cremation Services - Waldoboro
MEMORIES & CONDOLENCES
0 Entries
Be the first to post a memory or condolences.