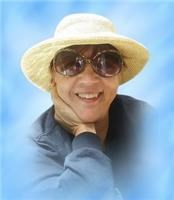 
When Mary Brown lost part of her left foot to complications of diabetes, she fought back with characteristic nerve, determination and, yes, humor.

"Just call me the nine-toed gammy," she quipped to her young grandchildren.

When she lost her right leg just below the knee to the same disease, she soon was calling the remaining portion "Stumpy," and then rechristened it, Ouiser Boudreaux, after the cantankerous but loveable character Mary had played in a local production of "Steel Magnolias." Her performance so impressed daughter Mackenzie that she and her mother became lifelong fans of the film version, a movie they watched and re-watched many times together. "She was a great mom, but also a heck of a lot of fun," Mackenzie recalled. Their favorite quote from the comedy-drama? What else but, "Spoken like a true smartass!"

"Her zest for life, love for friends and family, and courage to fight on inspired us all," said Blair Trunzo, one of her sons. "She will be remembered as a strong and wonderful mother and wife, and also for her passion for acting in local theater and dedication to a career as a civilian employee for the U.S. Army that spanned nearly three decades."

Son Ted Trunzo added: "A whole generation of South Fayette kids will always remember her fondly, as 'Momma T' or 'Momma B', whose kitchen always smelled so wonderful when she was cooking her famous chicken soup."

Arrangements by BEINHAUER-FRYER, 412-221-3800. Friends are welcome at 430 Washington Avenue, Bridgeville, PA 15017 on Wednesday 6-8 p.m. In lieu of flowers, memorial donations may be made to Stage 62 Productions in Carnegie, Pa. (https://www.stage62.org/donate.html) or the American Diabetes Foundation (https://www.diabetes.org/donate).
To plant trees in memory, please visit our Sympathy Store.
Published by Beinhauer-Fryer Funeral & Cremation Service from Sep. 7 to Sep. 8, 2020.
MEMORIAL EVENTS
Sep
9
Visitation
6:00p.m. - 8:00p.m.
Beinhauer-Fryer Funeral & Cremation Service
430 Washington Avenue, Bridgeville, PA 15017
Funeral services provided by:
Beinhauer-Fryer Funeral & Cremation Service
GUEST BOOK
Sponsored by Beinhauer-Fryer Funeral & Cremation Service.
2 Entries
My good, dear friend Mary Brown. I first met Mary when she came to work at the Oakdale Army Base. I can't remember the department in which she started her career, but she eventually came to work in the Facilities Engineer Office. She, of course, made the office a fun place to work with her jokes, antics, and wise cracks. She planned the entertainment of many a Christmas party at the Base, cajoling us into playing parts in the funny skits that she wrote and that we would put on. She planned a 40th birthday party for me at Peter's Place in Bridgeville and somehow managed to convince the restaurant owner to put "Lordy, Lordy, Joyce Lynch is 40" on the big Peter's Place sign that stood right on Route 50 for all to see, She had many of the people that I worked with gathered in a big circle in the parking lot in which she had me stand in the middle and they all sang me a birthday song that she wrote!! The most important thing in Mary's life were her children and the care, love, and guidance that she provided them. That shines through in them every single day. Mary will live on through her children and her grandchildren. And I cannot leave out her love for her David. Mary was so excited when she told me about the reporter named David that had called her to do a story about the closing of the Oakdale Army Base. She told me, so excited, "He has a Southern Accent!!!!". The rest is history. He was the love of her life, and she was the love of his life. Two Peas in a Pod. The sweetest most loving marriage. I will miss you so much my good, dear friend Mary Brown.
Joyce Lynch
Friend
September 13, 2020
As the days and weeks pass,and as you return to life's routine,may you continue to feel comforted by the love and support of family and friends.
September 11, 2020