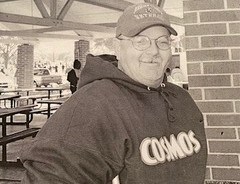 FUNERAL HOME
John M. Ireland & Son Funeral Home and Chapel of Capitol Hill
3228 S Western Ave
Oklahoma City, OK
Michael "Mike" Dubala of Oklahoma City, Oklahoma passed away on Wednesday, October 13, 2021, at the age of 67. After several months of declining health, Mike died peacefully knowing his wife Pam and their children were close by.
Mike was born in 1954 on June 23, to father Robert and mother Louise Dubala. The oldest of four siblings, Mike enlisted in the Marines on August 14, 1972 at age 18. He was stationed at Camp Lejeune, North Carolina from 1972-1976. Mike began working at Tinker Air Force Base in 1980 and retired in 2012.
Mike first met his wife, Pam, in 1977 while she was cruising in her 1975 blue camaro along SW 59th Street in Oklahoma City. They married on March 22, 1980. They had two children, Brian and Britnie.
Brian and Britnie both remember their dad always being present for their sporting and school events. Mike taught Brian how to fish and took him fishing at Tinker and Kitchen Lake. Mike took his children to see and even board some of the airplanes he worked on at Tinker Air Force Base. And oh what a fan he was of Thunder basketball and OU football. You knew the SOONERS had done something good when your phone beeped with a text that said "BOOMER".
Mike loved playing games and building puzzles with his grandchildren. Britnie will always remember if one of her kids hurt himself or herself, the other would almost immediately say, "It's ok, Grandpa Mike has a bandaid," even if they weren't with him.
Mike was preceded in death by his parents, Robert and Louise. He is survived by his wife Pam Dubala; his son Brian Dubala and his son's wife Kelly, his daughter Britnie Mendoza and his daughter's husband Andy; grandchildren Luke, Eli, Logan, Emmitt and Adeline; siblings Pat Price, Donna Hogue, and John Dubala; Aunt Vera Whisman; and Uncle Duane Dicus.
A memorial service will be held at Fort Sill National Cemetery in Elgin, Oklahoma on November 15 at 1 p.m.
To send flowers to the family or plant a tree in memory of Michael Robert Dubala, please visit our floral store.
Published by John M. Ireland & Son Funeral Home and Chapel of Capitol Hill on Oct. 26, 2021.
To plant trees in memory, please visit the Sympathy Store.
MEMORIAL EVENTS
To offer your sympathy during this difficult time, you can now have memorial trees planted in a National Forest in memory of your loved one.
Funeral services provided by:
John M. Ireland & Son Funeral Home and Chapel of Capitol Hill
MEMORIES & CONDOLENCES
0 Entries
Be the first to post a memory or condolences.