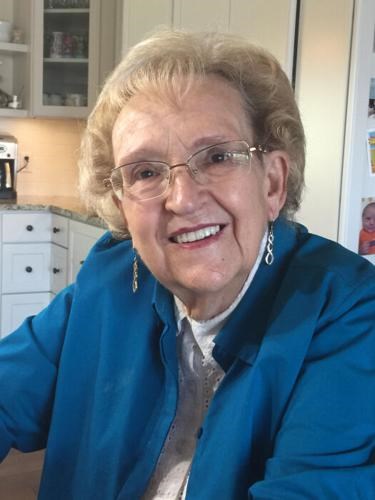 FUNERAL HOME
Stork-Bullock Family Mortuary - Lakewood
1895 Wadsworth Blvd
Lakewood, CO
Obituary
Myrna Glyann Holder, a resident of Arvada, Colorado, for more than fifty years, passed away Monday,
May 17, 2021 at Good Samaritan Hospital in Lafayette, Colorado. Born at home in Egnar, Colorado, on
August 8, 1936, Myrna was the first of John and Winnifred Griffin's two children. Her sister, Ruth, was
to follow six years later. She and her family moved to Dove Creek, Colorado, where her parents built a
house and rental cabins. It was there she and Ruth lived until they completed their educations.
Myrna married Tommy Joe Holder at age seventeen and began the long adventure of starting a family.
Tragically, they lost their first-born son, Roger Kern, a few hours after his birth. The loss stayed with
Myrna until her death. Big changes followed on the heels of Roger's death. Tommy joined the Air Force,
which meant tours of duty in Cheyenne, Wyoming, and Germany for the couple.
After Tommy's discharge from the Air Force, the couple returned to Southwest Colorado where they had
grown up. Tommy got a job as a shop mechanic for a mining company in Moab, Utah. Their first
daughter, Barbara, was born there. Their second daughter, Cheryl, came 18 months later in Tulsa,
Oklahoma, while her father was studying airplane mechanics. Myrna worked to create a stable
environment for her growing family throughout the moves needed for Tommy's career. Tommy
completed his schooling and got a job with Continental Airlines. He advanced at Continental from
mechanic to aircraft inspector and eventually to pilot. Two more children, Brad and Kristi, came along
while Myrna continued to support her husband in his career growth. Throughout their travels, Ruth,
and her husband, Lyndell Brickley, were a constant presence, source of support and companionship for
Myrna, her children, and Tommy to the point of moving with them when Tommy was transferred to Los
Angeles for school for a year. The family eventually moved to Arvada, where they lived together until the
children went off to start separate lives and begin families of their own.
Myrna and Tommy divorced in 1992, but Myrna remained in Arvada for the rest of her life to continue
her role in supporting and guiding her children and their children and participating in important life
moments. The only events that over-shadowed her divorce were the death of her son, Brad, who died
in 1999 of Cancer, and the sudden death of her beloved nephew, Todd Brickley, in 2004.
Myrna's deep faith in God kept her going through those difficult-to-bear times. She volunteered as the
bookkeeper for Colorado Bible Church for many years and was a founding member of Grace Church of
Arvada. She supported Grace's ministries for the remainder of her life. Her generosity also drove her to
support numerous other charities, such as St. Jude's Hospital and World Vision. She also volunteered at
Lutheran Medical Center in Wheat Ridge, Colorado.
Myrna was an active and welcome participant in the lives of her children, her thirteen grandchildren, 18
great grandchildren, 3 great great grandchildren, nephews, grand nieces and grand nephews. Her life's
focus was the happiness of those she loved. She travelled with her family, participated in various school
events, and cherished her friends, especially those in her church's small group, who were there for each
other for decades. Generous and unassuming is how she will be remembered by everyone who knew
her.
Myrna is survived by her daughters, Barbara Caywood (husband Jess), Cheryl Schack (husband Dick),
Kristi Cymes (husband Jon), her daughter-in-law, Theresa Morrison (husband Ron), grandchildren Kelly
Huff, Adam Huff (wife Danielle), Travis Schack, Nikki Asebedo, Tyler Schack (wife Amy), Megan Montoya
(husband Steven), Becky Harris (husband Tommy), Joshua Holder, Natalie Youngs (husband Greg),
Kaeleen Miller (husband Beau), Summer Stark (husband Cameron), Rally Cymes, Sierra Cymes, sister

Ruth Brickley (husband Lyndell), Troy Brickley (wife Anne), great nephew Sam Brickley, great niece Katie
Brickley, and dozens of great grandchildren, great great grandchildren, great nieces, and great nephews.
A memorial service will be held at Grace Church, 6969 Sheridan Blvd, Arvada, CO 80003, on Wednesday,
05/26, at 10:00 AM. Myrna will be interred at a later date in Dove Creek, Colorado, with her first son,
Roger. In lieu of flowers, the family would like to suggest that a donation to Grace Church in support of
its many ministries would be appreciated.

Care of arrangements have been entrusted to Stork-Bullock Family Mortuary of Lakewood.
Send sympathy flowers to the funeral home, or plant memorial trees in a national forest.
Published by Stork-Bullock Family Mortuary - Lakewood on May 21, 2021.
MEMORIAL EVENTS
May
26
Memorial service
10:00a.m.
Grace Church
6969 Sheridan Blvd., Arvada, CO
Funeral services provided by:
Stork-Bullock Family Mortuary - Lakewood
MEMORIES & CONDOLENCES
1 Entry
I will never forget Brad holder and myself were passing out flyers to try to get kids to go to Sunday school I told Brad I´m tired going door to door so let´s just throw them up in the air and they can get it themselves in the meantime the Arvada police came by and we had to pick them all up. To the holder family your mom will be truly missed Just think we´re all going to see each other someday.To the Holder Family you guys are awesome.
Douglas Stier
Friend
May 27, 2021
Showing 1 - 1 of 1 results