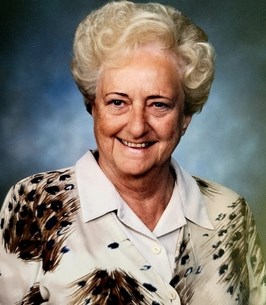 FUNERAL HOME
Absolute Economical Funeral Home Llc
7721 NW 10th St Ste B
Oklahoma City, OK
Nancy Loulse Voight, age 86, passed away peacefully at her home in Edmond, Oklahoma on Friday, the 19th of November 2021.
She was born on the 2nd of September 1935 in Oklahoma City, Oklahoma. Nancy grew up on the outskirts of downtown Oklahoma City during the Depression and World War II years. Her father left the family when she was a baby and she, her sister Rosemary, and her mother Louise Stover lived with her grandmother in her great-grandparents' small house on N.W. 2nd Street.
She met and married Jim Voight when she was 17. They had 3 children, Ricky, Randy, and Regina. When all 3 children became old enough to attend school Nancy began working in school cafeterias for the Oklahoma City School System, eventually becoming a cafeteria manager. She managed the cafeteria at Horace Mann Elementary, then Nichols Hills Elementary, Hoover Junior High School, and finally retiring from John Marshal High School. She was famous for her delicious 'school rolls' and huge cinnamon rolls. Her sons would often stop by the school to pick up platters of cinnamon rolls to take to work. This always made them popular with their co-workers.
Her mother was a seamstress and dressmaker and taught Nancy how to sew. She loved making clothes and baby blankets for all her children and grandchildren.
Nancy had a deep love for all her children and grandchildren and was intensely protective of them. She loved spending time with them all, especially during the holidays.
Nancy was preceded in death by her parents, Thalbert Eugene Stover and Elsie Louise Magill Stover. She is survived by her husband, James 'Jim' Lewis Voight, son James Richard 'Rick' Voight and his wife Debbie, son Randal 'Randy' Lewis Voight and his wife Pam, daughter Regina 'Gina' Louise Voight, grandchildren Jon Erik Voight and his wife Courtney, Jeremy Todd Voight and his wife Krystal, Joshua Troy Voight, Wesley Shane Guinn and his husband Tyrel, Jami Vera-Tudela and her husband Dieter, 9 great-grandchildren, her sister Rosemary Stem and her husband Bob and their children Larry Stem and Cyndy Peterson.
The family will gather for a private committal at Gracelawn Cemetery in Edmond, Oklahoma.
Published by Absolute Economical Funeral Home Llc on Nov. 25, 2021.
To plant trees in memory, please visit the Sympathy Store.
MEMORIAL EVENTS
To offer your sympathy during this difficult time, you can now have memorial trees planted in a National Forest in memory of your loved one.
Funeral services provided by:
Absolute Economical Funeral Home Llc
MEMORIES & CONDOLENCES
0 Entries
Be the first to post a memory or condolences.