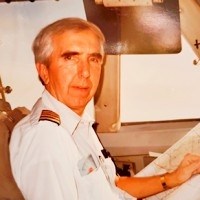 BORN
1925
DIED
2021
FUNERAL HOME
Washburn-McReavy Funeral Chapels - Edina
5000 West 50th Street (at Highway 100)
Edina, MN
Dolny, Raymond L. Age 96, of Minneapolis, passed away peacefully on August 27th with family by his side. Preceded in death by parents, Andrew and Elizabeth; daughter, Diana; five brothers and three sisters. Survived by caring wife of 68 years, Dee; daughter, Debra (Don) Egan; son, Steven (Lynn); brother, Leonard; grandchildren and great-grandchildren. Ray was committed to his family and church. He was generous with his time and talents, always willing to help out where needed. He enjoyed golf, tennis, softball, and fishing. Ray was a kind, patient man who will be missed by many. After graduating South High School in Minneapolis, he joined the Army Air Corps. He trained as a flight engineer on the B-29 during WWII and was a P-51 crew chief during the Korean War. In 1947 Ray was hired by Northwest Airlines as a mechanic working his way up to flight engineer, co-pilot and eventually retiring as a captain on the 747. Ray was well respected by his peers and was elected for two years as president for the Retired Northwest Airlines Pilots Association. In retirement he loved sharing his knowledge of aviation and the airlines at the NWA history center. Funeral service will be held Saturday, September 25th at 11 AM with visitation 1 hour prior to service at Holy Emmanuel Lutheran Church, 201 East 104th St., Bloomington MN. Memorials preferred to Holy Emanuel Lutheran church or donor's choice. Washburn-McReavy.com Edina Chapel 952-920-3996
Published by Washburn-McReavy Funeral Chapels - Edina on Sep. 19, 2021.
To plant trees in memory, please visit the Sympathy Store.
MEMORIAL EVENTS
To offer your sympathy during this difficult time, you can now have memorial trees planted in a National Forest in memory of your loved one.
Funeral services provided by:
Washburn-McReavy Funeral Chapels - Edina
MEMORIES & CONDOLENCES
Sponsored by Washburn-McReavy Funeral Chapels - Edina Edina Chapel.
0 Entries
Be the first to post a memory or condolences.